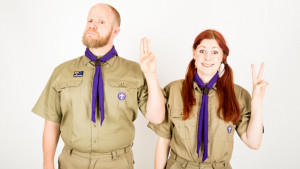 Sarah Jones and Nicholas J Johnson are the leaders of the second Black Hill scout troop, and we, the audience are their scouts. It’s a merry journey through the woods, with darkly comic undertones that had the audience chuckling the whole way through.

Happy Campers avoids the expected jokes around scout leaders and takes things in a funnier, more unexpected direction. The script is wittily-written and plays to the performers’ strengths. There’s a fair dose of pun-based dad jokes in the show, but they’re told with enough cheesy good humour to get by.  Jonestown tread a fine line with their comedy, the sillier moments contrasting with the more gruesome elements of the storyline. Although there are a lot of plot hints laid out, the end does feel a little abrupt and severe compared with the tone of the rest of the show. That’s a minor hiccup, however. By and large, Happy Campers strikes the right balance between the dark and the daffy.

The rapport between Jones and Johnson is fabulous. Their performance is polished without feeling over-rehearsed. Jones’ cheeky antagonism of Johnson is a delight. The duo establish a good relationship with the audience, making them feel like part of the act. Positioning themselves as the leaders of our scout troop was a clever choice, getting the audience prepared to be part of the story. Often times those chosen to participate were more enthusiastic to get involved than they were required to be, which was a nice change from the usual awkward reluctance.

Jonestown have produced a well-constructed, thoroughly entertaining show in Happy Campers. They have completed their run of shows for the festival, but on the strength of this, I would recommend keeping an eye out for whatever they do next.