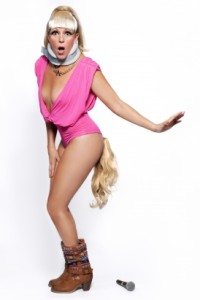 Adrienne Truscott made an impact with her debut solo show Asking For It – a stark comedy about rape in which Truscott performed partially nude. Such a strong show out of the gate could have been hard to follow up, but Truscott has well and truly done it with One-Trick Pony. It’s a fascinating and devastatingly funny exploration of irony, feminism and what makes a person a comedian.

From the moment the show begins, Truscott blends the “shocking” with the absurd, appearing nude but for a spangly gown held to her front by a coathanger, while the blandest of melancholy pop plays. Scrolling text on a screen informs the audience that this opening is “deliberately bad” and the tone is set.

Truscott is an incredibly engaging performer, combining stand-up and physical comedy with an unhinged energy that leaves the room on edge. She blurs the line between her genuine and performed self, leaving you unsure what’s part of the act, what’s being made up on the spot and where things might genuinely be going wrong.

One-Trick Pony heavily references the work of Andy Kaufman, with clips of some of his better-known work played on a screen, and re-created by Truscott – both live and in some clips with cameos from local comedians.

Through the framework of Kaufman’s comedy, Truscott examines how the work of female comedians is perceived, specifically looking at the reaction to Asking For It. While it’s rarely questioned that Kaufman – who, as Truscott notes, never told a joke – was a comedian, female performers who step outside the box aren’t always given the same benefit of the doubt, given labels like “performance artist”.  A male comedian telling dick jokes is doing “blokey stand-up”, but a female comedian joking about her vagina is doing feminist material.

It’s a train of thought that struck me as particularly relevant, reading reviews recently where some of the more out-of-the-box female comics have been dismissed by critics as weird or ill-prepared. While things are certainly getting better, there does seem to be a subconscious bias where male comedians are given the benefit of the doubt that they know what they are doing. One-Trick Pony is timely and provokes conversation without being preachy.

Truscott uses the words of her reviewers for comedic purposes, flashing them up on a screen in juxtaposition with her actions. It’s a show that appears to be constantly evolving – on the night I attended, words from a review of her MICF opening night had been thrown into the mix, to great effect.

Layered on top of the tricksier elements of the show are snappy dick jokes and tales of Truscott’s time as a stripper, which are funny in their own right and hilarious in the context of the broader performance.

One-Trick Pony is a must-see show. It’s absurd and clever, will leave your face hurting and your brain fizzing. I find it hard to express my love for this show in words. I just want to wrestle it to the ground and take it out for milk and cookies.

Adrienne Truscott’s A One-Trick Pony! (Or Andy K**fman Is A Performance Artist And I’m A Comedian) is on at the Malthouse Theatre