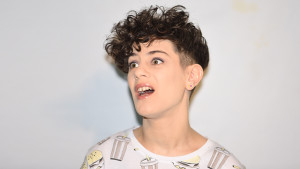 Jude Perl is an extraordinarily talented musical comedian. She’s an amazing singer full stop. She could have been a great pop singer but something is urging her to write comedy songs and I encourage that urge, for it is an excellent urge, the sort of urge that drives great comedians and I suspect she is destined for Greatness.

There is no patter up front, Jude Perl opens with what she does best, an original musical comedy song at the piano. They are not simple one joke songs. She packs a lot of jokes and laughs into each song and all are highly intelligent, cynical and toe tapping. I can’t help but draw comparisons with the first time I saw Tim Minchin or Geraldine Quinn and was completely blown away by their talent.

Jude’s show is about having to bow down to commercial interests to make money while dreaming of a more artistically rewarding recording contract. She writes (very funny) jingles for the (fake) Sugar O company who have paid for her album and her comedy festival show. Other songs are about love, trying to please others and how hard it is to be a decent person in a pretty screwed up world. She also manages to sing impressive harmony with several incarnations of herself.

It’s a simple setting with Piano for playing her songs on and a stand up mic for the stand up comedy between songs. Some of the stand-up is part of the sort-of-plot as she yacks with the disembodied (pre-recorded) voice of her manager. The highlight for me was her material about the creepiness of the people who decided to make Law & Order SUV or the Saw movies (let alone those who are keen to watch). Very sharply observed and very funny, she has a natural comedic voice.

The only negative was the positioning of the piano (which is always going to be a difficult hurdle) meant that not only was she hard to see but we didn’t get to see the two fabulous costumes she changes into properly. The boob dress (yes it’s a dress covered in boobs) can be seen in her youtube video for ‘Pop Singer’ a fabulous song about society’s expectations of modern female pop singers. I was a little disappointed not to see any of her very professional looking pre-recorded comedic video ads for Sugar Os as part of the show (She made them as promos for her show, why not put them in it?). In the end though she doesn’t need them, there is definitely enough here for the audience to be wowed by.

Jude was a RAW finalist in 2014 and has only been doing comedy for a couple years. She has the talent, comedic nous and stagecraft of someone who’s been doing it for a lot longer. If she’s this great now, I think she’s heading for inevitable stardom.