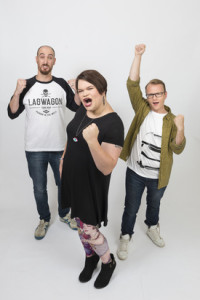 If you keep up with your comedy news, you’ll know that there’s been a change to the Axis of Awesome (Jordan Raskopoulos, Lee Naimo, and Benny Davis) line-up recently. One thing that hasn’t changed, however, is that this trio is thoroughly talented. Won’t Never Not Stop Giving Up is musical comedy that’s fun and silly, but packs a punch.

The Axis of Awesome cleverly address any questions the audience may have about Raskopoulos’ gender transition in a hilarious opening song. Naimo also demonstrates how not to behave in a running gag where he is painfully over-supportive of his bandmate. Aside from that, things largely remain the same. There’s absurd songs, pitch-perfect parodies, and the sold-out crowd loved every minute of it.

Won’t Never Not Stop Giving Up delivers the laughs with new songs and a selection of old favourites like ‘Birdplane’, ‘4 Chords’ and ‘Ode to KFC’. Jackie Change, who some may remember from Naimo’s solo show Definitely Not A Trap, makes an appearance with the gloriously silly tune ‘Square of Ice’. The new material is strong – a collection of Will Smith raps were absolutely wonderful, and a bizarre song about an octopus left me still giggling about it the next day.

Raskopoulos, Naimo and Davis have an amazing comedic chemistry on stage, each bringing their own unique energy to the performance. You can see that they’re having a great time, and still have the ability to crack each other up after 10 years of performing together.

The Axis of Awesome may have more than 200,000,000 views on YouTube, but they truly are a band that needs to be experienced live. Get in quick – their MICF run is a short one and if opening night was anything to go by, tickets are going to disappear quickly.