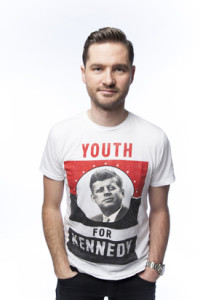 In 2016, Charlie Pickering is a MICF veteran, but that doesn’t mean this isn’t an exciting period for the comedian. To the majority who are familiar with him through TV, he’s recently made the significant shift from Channel Ten to the ABC, and from the former’s relatively reasonable roundtable to the latter’s more satirical, John Oliver-inspired show, a move that fortified his status as a nice, universally accessible funny man who’s also engaged with The Issues. This reputation isn’t undeserved: Charlie’s an intelligent man, who’s cited greater freedom from sensationalist, commercial pressures at the ABC as motivation for the change. The kind of thoughtfulness and gentle humour he brings to his interviews is evident throughout his new show How To Tame A Wild Squirrel, although, unfortunately, so are occasional stretches of more middling material.

How To Tame A Wild Squirrel has a feel typical of a successful comedian’s annual special, where the audience gets the treat of listening to a voice they already know and love take on the topics of the moment. There’s a pretty great takedown of the banal merry-go-round of morning news programmes, a thoroughly apolitical anecdote about inappropriate Twitter wisecracking in the wake of the Paris attacks, and, as the title already spoiled so get off my back, some practical advice about squirrel-taming.As expected for Pickering, whose comedy by now is known to be intertwined with occasionally subversive political punditry, he spends some time reflecting on politics. He mourns for Tony Abbott’s slapstick prime ministership in a eulogy of monumental passive aggression. He also deals boldly with race, looking at controversies such as the booing of Adam Goodes and the continual and moronic reinvestigation of whether it’s OK to do blackface. Not surprisingly, this is the most thrilling and funniest stuff Charlie offers with this show. Being a nice white boy, Charlie hasn’t got as much to lose chastising middle Australia for its racism as a comic of colour might, but his jokes around the issue are smart and accurate without presuming to speak on behalf of minorities, and it’s a good thing that someone with such a wide audience keeps the subject of race front and centre. Considering his experience, he drags the occasional gag for one too many laps of the stage, such as an overlong bit about millennials’ phone-using that’s not particularly more artfully told by him than by your mate’s dad. While the majority of his material is strong and the laughs are consistent (a couple of the aforementioned gags received applause), the occasional speedbump like this does slow his momentum in creating a frenzy of hilarity.

How To Tame A Wild Squirrel is an enjoyable, solid hour of stand-up that has enough interesting ideas peppered through it to keep things exciting, and its brightest moments are pretty hilarious. It’s worth bearing in mind that it’s a show by one of Australian comedy’s most reliable stars, so it never touches on anything truly radical the way the big names of American comedy sometimes can. How To Tame A Wild Squirrel proves that Charlie Pickering is well aware of his wide appeal, so it’s a safe bet that he’ll have a joke or two prepared specially for you.

Charlie Pickering How To Tame A Wild Squirrel is on at The Comedy Theatre Thursday nights only.