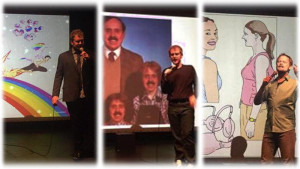 A regular night on the Brisbane comedy circuit, Speechless Live comes to the Melbourne Fringe. A cross between Set List and a PowerPoint presentation, this improvised show uses a slide show of images for the performers to work with. It’s a fascinating concept and immensely fun but it relies heavily on the quick wits of the talent to pull the humour off successfully.

A virtual wheel is spun to select the format that the speaker is to adhere to (such as Public Apology, TED Talk, etc.). With this public speaking structure, it encourages the acts to develop a narrative of sorts rather than just rattle off a set of jokes. A series of projected images are to be incorporate into their presentation including many bizarre ones that get laughs from the audience before the performer weaves their magic. There is the temptation for the comic to simply vocalise what they see, but the more successful acts approach the images from a different perspective. The duration each image is shown varies wildly. Some performers prompt for the next slide when they want to move on while others try to come up with more amusing lines until finally being put out of their misery with the appearance of the next image.

Our host Glenn Stephens came across as more a presenter than a comedian with emcee skills. He didn’t do much in terms of warming up the audience, instead concentrating on administration such as explaining the format of the show, introducing the performers and soliciting applause. On the positive side he made us feel welcome and kept the show moving along efficiently.

Andrew Port Elliot was the first guest and spun up “Public Apology”. He managed to come up with a number of amusing lines throughout his ten minutes but he found it hard going as demonstrated by his slow pace and long pauses as he searched his brain for amusing material.

Next up was the MVP of the night, Wei, who blitzed his “Dating Seminar”. With his comically aggressive sales pitch, he came up with some hilarious and inspired interpretations of the images he was given. Even though he became a little repetitive as his time wound down (they all did this as they ran out the clock), Wei was a difficult act to follow.

The one to follow Wei was the softer-spoken Mayumi Nobetsu who was also issued a “Dating Seminar” following an audience choice. Using an interesting mix of innuendo and Eastern Philosophy, she provided some laughs but also struggled a little in providing consistently amusing lines.

Rounding out the night was the boisterous Nadine Sparks who gave us a First Contact with aliens. As an experienced stand up, she showed her commendable improv talents with interesting banter and numerous asides that took us all over the place.

There was a hint that audience participation is a part of the show but this did not really eventuate. Our involvement seems to be limited to when the acts banter with us and the “Audience Choice” option on the wheel.

With a different line up each night, Speechless Live is a fun improvised experience that is worth checking out. You may just discover a new improvising genius.

Speechless Live is on at Highlander until September 24
https://melbournefringe.com.au/program?event/speechless-live/a29b62b0-cae0-492f-9fee-ed089820ac5f