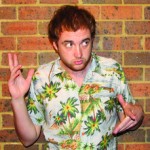 One of my favourite discoveries of last year’s festival was John Conway’s “The New Conway Show” show, which I was recommending at every opportunity. There were a lot of expectations going in here, but instead of meeting those, John just decided to make whole new set of expectations and exceed those instead.
It’s difficult to describe John Conway’s surrealist comedy, not least because it’s hard to determine how much of the show is likely to be repeated from night to night. Whether re-enacting 90’s video games or creating giant string phone contraptions, most of the scenes have a fair bit of setup behind them, but they all seem like half-formed ideas that John is taking out for the night to see where they might lead him. Sometimes these leaves the show flying apart into chaos, but for the most part John pulls together a series of hilariously absurd sketches.
This new show has a lot in common with last year’s brilliant comedy festival debut, but if anything John seems to have allowed himself even greater reign with the improvised chaos. Helping to balance this out is Michael Burke, providing some grounding in the form of musical queues and a slightly more stable character for John to pull himself back to when his comedy takes him off into the deep.
John has a very infectious enthusiasm for what he’s doing, often barely able to contain himself or even complete his train of thought when caught up in a funny idea. With a less charasmatic performer, this often overwhelming enthusiasm could be off-putting, but through a bizarre combination of chaotic aggression and rapt innocence, the audience is never really given any choice but to get caught up in the madness.
This is not a show for everybody, and at certain moments it threatens not to be a show for anybody, but there’s a rich vein of comedy gold for anybody willing to follow John down into the chaos.
John Conway – The New Conway Explosion is on at Trades Hall
http://www.comedyfestival.com.au/2012/season/shows/the-new-conway-explosion-john-conway/