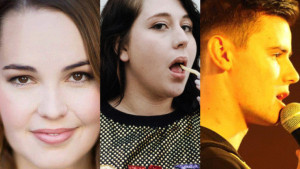 3 Little Gigs is like a plate of hors d’oeuvres before a big name dish at the Melbourne International Comedy Festival. It’s a show that has been running for several years early in the evening so you can check out a trio of young talented new comers, have some dinner then see a favourite.

The performers doing 3 Little Gigs, Nick O’Connell, Bec Charlwood and Rhi Down, are all young comedians who’ve only being hitting stages for a few years but have all been RAW finalists and are from far flung parts of Australia. They are all doing straight stand up with no bells and whistles with a theme about younger generation’s openness about their sexuality and frankness about pornography.

Nick o’Connell, originally from Adelaide but now settled in Melbourne, has stories of travel and of his experience as a History teacher, especially Catholic schools. He has a pleasant gentle style with some disturbing and dark notes, such as revealing that he hates kids and when discussing dating he declares that he’s a “Weapon on the tinnies” and “Mad Dog’s Arrived”, I’m hoping he’s using these ironically, but it is a bit hard to tell.

Nerdy and somewhat gothy, Rhi Down is from Brisbane and as well as talking about her sexlife Rhi keeps pet rats that she refers to as her ratbabies. Confident and bubbly she has a genuine natural funniness that will mature well.

All three performers have what it takes to entertain an audience, they are all confident, good storytellers and can find laughs in every day things.  Like most of our best comedians they are beginning by dipping their toes into the Festival circuit to exhibit their work on a shared bill and will take time to mature before they are ready for a solo show.

When strangers or people at work ask what they should see at MICF, I always suggest they pick someone they like from TV or radio who will now doubt be a sure thing, then pick someone they don’t know at all. This is a great little show to see new comedians that you will want to keep an eye on in the future.

3 Little Gigs is on at The Imperial Hotel

For tickets and further information go to the Melbourne International Comedy Festival website: