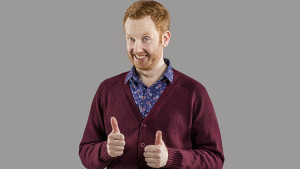 Luke McGregor was always a bit of a fixer upper. His standup comedy, since he landed on the mainland from his home in Tasmania has always been about his insecurities. He’s been so stressed about his looks, his OCD and his prowess with the ladies that there are times when his audience genuinely worries about him. This all came to a head last year when Luke decided to do something about these things and his show is about all of this and it’s repercussions.

The first half of the show is for all those Luke Warm Sex fans and may make any shy audience members who’ve come for the OCD stuff squirm a little. Yes for all those curious folks, Luke has got a girlfriend and he is learning how to cohabitate with her. This comes as a relief for fans who followed him on Luke Warm Sex who give him a round of applause. Luke has a lot of observances to share about getting used to his new living arrangement, but they are not your usual ones. The show has made Luke even more open about issues that most people would prefer to keep quiet. The stage is a safe place for Luke.

Luke has been the King of Self Depreciative comedy for some time, it’s great to see that despite him gaining in confidence as a performer, it is not impacting negatively on his comedy. The second half of the show deals more directly with how he’s been working on his ‘issues’ and garners another encouraging round of applause. He’s worried that if he fixes all his problems and tics that he might lose what has made him a successful comedian.

This is a warm, funny and fascinating show by Luke. The highlight though was about 2/3rds in when about six people arrived late to sit in the front row. Luke handled it so brilliantly that it showed his stagecraft, comic timing and ability to judge his audience. It proved that his comedy is not just a product of his personal issues, he is a born comedian who will be as great without them as he has been with them.

Almost Fixed It is on at Thhe Comedy Theatre until April 9
https://www.comedyfestival.com.au/2017/shows/luke-mcgregor