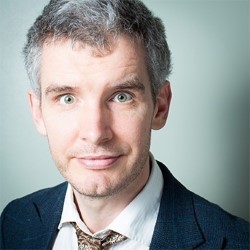 It’s been I while since I have caught the stand up of Adam Vincent, probably before he moved to London five years ago. His show How Not to Kill Yourself When Living in the Suburbs sees him present his quirky world view to a regularly packed room (my tardiness saw me standing up the back of the dungeon type venue). The title pretty much covers what you can expect – tales and jokes about living in the suburbs – being unfulfilled with your lot and feeling generally frustrated with the world. He tells amusing stories about spousal grumblings, the drudgery of work, free loading mates and technological issues.

Adam regularly presents us with bleak material but his friendly stage manner makes it easily palatable. He tests the boundaries early on but as he plows on regardless, he doesn’t lose anyone. Vincent has a bit of a world weary, downtrodden vibe to him that is delivered with a cheeky smirk. He does mock outrage well and gives us a bit of “having a breakdown on stage” ranting. He talks of anger management issues but his laid back Aussie attitude hides it well outside of the odd comical outburst.

It was a nice touch including some appropriate songs as intro and outro tunes. Singing along the words “We Gotta Get Out Of This Place” (the original NOT the Angels version!) is a cathartic release for everyone and hints at what is to follow. This is a note perfect exploration into the dark yet hilarious undercurrent of suburbia.

How Not to Kill Yourself When Living in the Suburbs is on at Laughing Horse @ Espionage until August 27
https://tickets.edfringe.com/whats-on/adam-vincent-how-not-to-kill-yourself-when-living-in-the-suburbs