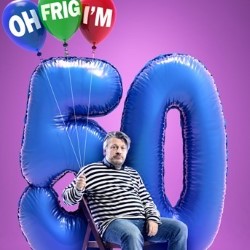 Richard is shocked to find he is turning 50. This show is a sort of follow up, or perhaps, a 10th anniversary of his Fuck I’m 40 show. He has kindly provided crowdfunded programmes on the seats, just in case you haven’t followed Richard Herring’s career. We also get some time to peruse them before the show starts.

This is a pleasant show about a lads lad manchild dealing with aging, being ignored by the younger babes and getting used to being married with kids. The most interesting point he made was that being 50 and ignored by Babes made him realise that this was the 1st time that a white privileged male felt a little of what it was like to not have that privilege. To drop in the pecking order of life. The rest felt a little annoyingly like humblebragging.

Richard had several stories to tell around fatherhood – he’s had a daughter since he was 40 and there is another on the way. Talking about the joys of sharing his kids toys and some of his kid’s TV shows are the highlights and he’s brought a gorgeous ‘Penguin Race’ toy to show us. He talks about the consequences of some of his newspaper articles and I can see why the guy behind me in the queue before the show was saying how he went out of his way to get the newspaper to read Richard’s column. Richard is a great story teller and the jokes keep rolling throughout.

Some of Richard’s filthy tales are not for those looking for a comfortable ride. Otherwise it’s a pretty run of the mill show for a talented, middle aged comedian and a friendly catchup for his fans.

Richard Herring: Oh frig, I’m 50! is on at Pleasance Courtyard until August 26