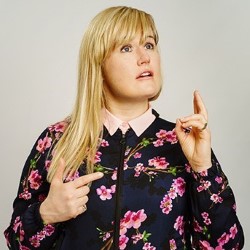 This show is exactly what it says on the tin – Sarah Bennetto presents us with a list of mistakes that she has made, telling the story behind each or making a short joke. While they seem to be ranked according to the importance she gives them, the order in which they are revealed works up to the core message of the show.

I could be pedantic and say that not all on the list are “mistakes” (we have regrets, circumstance and character traits in amongst them) but they do fit in perfectly with the overall story Bennetto is telling. We hear about embarrassing social faux pas, wacky hijinks (see Sarah’s social media for coverage of the Rainbow Unicorn Piñata Saga), cute familial rituals and many missed opportunities.

Things take a sharp turn into serious territory with a shocking revelation and the laughs come to a halt. It does seem that this issue is still a bit too raw for Sarah to scrutinise too closely as she hasn’t found a way to successfully find the humour in it. This tends to push this performance firmly into comedy as therapy territory but it’s an important issue that she needs to talk about. Thankfully some comedy relief is in sight with the cute but doomed colourful fella who has been sitting on her table throughout the show.

Bennetto is a charming and delightful performer. Her storytelling skills are top notch (unsurprising as she is creator of the regular Storyteller’s Club night and touring concern) but her observational stand up is just as strong. This is a immensely personal show and she steps up to the challenge of finding humour amongst the disappointments.

All My Life’s Mistakes, Catalogued (Volume One) is on at Laughing Horse @ Espionage until August 26