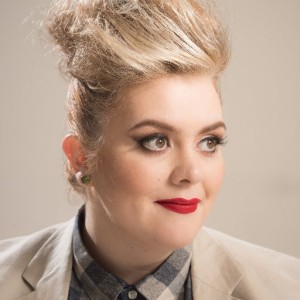 Jayde Adams enters the space dressed like a vaudeville hobo with a battered old fashioned suitcase. Silently she produces a box of chocolates and has some fun eliciting laughs from the audience without speaking a word. Mime, one of the many unexpected talents that Jayde unveils throughout in her bid to win over the audience. She succeeds in spades.

If you don’t know Forrest Gump the opening might be a bit of a mystery, but she soon explains it and the other films she has memorised by heart, Edward Scissorhands and Phantom of the Opera, all with leading men who are shunned by society. All are about shunned outsiders who people run from but turn out to have unique talents that endear them to people and romance, eventually ensues. As we learn more about Jayde’s life, it’s not surprising to learn why she relates to these characters.

Its always surprising to discover that someone so bubbly and good with audience banter on stage can be so lacking in self-esteem off stage. Jayde brings an audience member on stage to live out one of the scenes from her favourite films and does a great job in making her feel comfortable and cared for. The joke is shared and never cruel.  Like many of us Jayde has discovered that she spent too much time in her 20s trying to impress people who were not kind to her and were just not worth her time and love.

Jayde’s natural talents are many, some of them blow the audience’s minds, some of them are a little rough around the edges, but she’s only been performing in the comedy world for a very short while and has buckets of potential. She manages to tell some very sad stories in creative ways while keeping things fairly light and funny throughout. The audience is won over pretty early and stays with her for the whole ride.

The highlight for me was the song ‘No More Ms Nice Jayde’ which was a powerful original song that had me weeping. I think I related to this a little too much and this is the key really, if you can relate to where Jayde is coming from, if you’ve ever been made to feel like a freak or been betrayed by those you love, this show is for you.