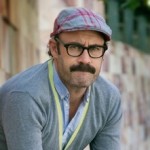 Ok, if you been even the least bit interested in the Melbourne International Comedy Festival over the past 7 or 8 years, you know Sam Simmons is always touted as one of the highlights. With 5 star reviews, a Piece of Wood award and an Edinburgh Best Comedy Show nomination under his belt, there’s no questioning Sam is a powerful comedy force, with a killer moustache to boot.

Sam’s latest theatrical masterpiece About the Weather tells the tale of a man trying to find the courage to talk to his “bus crush”, a task made harder by his fear of small talk. Sam uses this simple premise to drag the audience into his own world of personal struggle, anger, self-loathing, those lucky Chinese waving cat things and impossible IKEA flat pack tables.

Sam’s world is also one in which he is always exploring and questioning his surroundings, like the hidden subtexts in small talk, the stupid information the human brain retains, and the eternal struggle for happiness and purpose.

Powered along by his narrator and audio swiss army knife of tricks and bad 90s music, the audience is bombarded with the experience that is Sam Simmons, full-pelt.

Sam delivers his broad comedy with such whimsy, surrealist energy and expert timing;  his commitment to his art is glorious. Some great prop use and clever lighting also adds depth.

More laughs are extracted from a supporting cast of willing and unwilling audience members, audience members such as myself, who were subjected to a game of “Spin-ception”, which I’m sure would have been hilarious if it wasn’t me! Ok, it was still hilarious and serves me right for sitting in the front row, I guess.

The show is incredibly technical and structured, and it’s a pleasure to watch it all unfold, knowing the amount of commitment and effort that must go into making such a show look so seamless. Sure, there’s a few little tech hiccups, but with so much going on, it’s a minor blip on the radar.

Yes, we can analyse the comedy of Sam Simmons all we want, but to just sit back and take it all in is one of the best experiences you’ll have at the festival. You’ll be back for more year after year.

Sam Simmons- About the Weather in on at Melbourne Town Hall.
For Tickets and more Info, go here http://www.comedyfestival.com.au/2012/season/shows/about-the-weather-sam-simmons/