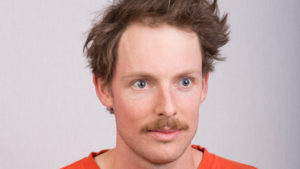 A sold out Saturday night crowd converged on the Melbourne Town Hall’s magnificent Portico Room for an hour with New Zealand comic Guy Montgomery. A mid seventies version of The Hustle greeted the audience pre-show, and set the tempo for what would be a fast paced hour of stand-up.

Guy Montgomery has all the necessary skills for his chosen profession. He is affable, has a delightful turn of phrase, and great energy. He moves his show along at a cracking pace, making sure he’s bringing his audience along with him for the ride.

He’s also a man of his word. At the risk of needing a spoiler alert, the title of the show turns out to be entirely correct. He starts by reverently placing his phone to one side, and manages not to refer to it for the next hour. He helps the audience to match his heroics via the use of a large analogue clock, which he brings on to allay any need to reach for one’s phone.  And this leads him neatly into a discussion on technological addiction, then into the rest of his set.

I was a little disappointed by his choice of material. After some initial stuff on fridge contents and grocery shopping, the show shifted to reflections on his career in comedy thus far. His experiences on the MICF Comedy Road Show, and in trying his luck in the New York comedy scene provided him with a rich source of material – but I found that the particular anecdotes he chose to share from those situations were a bit passé. Smile-worthy, yes. Chortle-worthy, sometimes. But I felt the routine lacked the big laugh lines which should have resulted from his impressive story telling capacities. Fortunately, his genial demeanour kept the audience well and truly on his side.

There are some powerful messages underpinning this routine about loneliness, and the need for connection in times of failure. Montgomery explores these with a charming self deprecation and candour.

I’m sure this set will appeal to many, and many will relate to his keen observations. I will certainly look forward to seeing what he brings to future festivals.

Guy Montgomery Doesn’t Check His Phone for an Hour is playing at the Portico Room at the Melbourne Town Hall until 22 April
https://www.comedyfestival.com.au/2018/shows/guy-montgomery-doesn-t-check-his-phone-for-an-hour