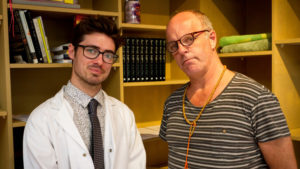 Sam Peterson and Greg Fleet, co-hosts of the Rusty Fragment podcast and other Rusty endeavours, bring us Rusty Fragment Live – the sketch show. Hung upon a framework of the duo discussing and devising the show itself, it is a ramshackle production in both storyline and execution. Even the minimal props and costuming planned for the sketches are lucky to reach the stage most nights.

The looseness of the show does have a certain charm, their enthusiasm is infectious and the goodwill of the audience lets them get away with quite a bit. Bringing attention to the show’s shortcomings is cute at first but tends to get tiresome, regardless of the many witty comments they pile on top.

Peterson’s role is primarily to play straight man to Fleet and to try and rein him in when wandering off script and boy does Sam have his work cut out for him! Fleety easily loses his place in a sketch and improvises to cover but the momentum of the scene grinds to a halt. With a few self-deprecating comments about the progress of the show, they manage to get back on track and limp towards the punchline…And Scene.

There are some genuinely funny sketches but these ideas are constantly in danger of being stomped on by their very sloppy delivery. Most of the scenes have a comically aggressive tone while others are whimsically daft. Long time Fleet fans get to see a classic monologue which tickles the funny bone and he goes off on some flights of fancy just like the old days that range from absurdly hilarious to silly filler.

This is certainly not the most polished show of the festival. You’ll find plenty of laughs if watching two mates dick about on stage is your thing, if not you’ll be frustrated.

Rusty Fragment Live is on at FAD Gallery until April 21
https://www.comedyfestival.com.au/2018/shows/rusty-fragment-live