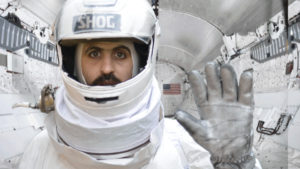 Wow! What a glorious mess of a show. Charles Horse Lays An Egg initially has the veneer of a Gaulier-styled clowning show but while it follows some of the tropes, this is a chaotic experience performed by a professional fool with none of the polish and all of the chutzpah.

The latest show from Cam Venn does exactly what it threatens to in its title and blurb but this wafer thin story is not the main attraction. He has a number of gross-out set pieces to titillate the crowd but seeing Venn flail about the stage with a plethora of props and overly complicated costumes is what really has the audience in hysterics. Phallic imagery is a motif in this piece and Venn is constantly in various states of undress, so it’s obvious that this show is not one to bring your prudish friend along.

The stage is filled with numerous inventive props that have clearly had hours of work put into them but they are regularly used only for throwaway visual jokes. Similarly his overly elaborate costume changes are for characters with less than five seconds of stage time. Seeing him constantly struggle with his outfit for minutes at a time is regularly hilarious and when things fail it gets even funnier.

It wouldn’t be a physical comedy show without audience participation and this contains some fun but often pointless examples. Punters not only offer assistance to Venn getting in and out of his gear but assume minor and ultimately inconsequential roles in the story. They are regularly handed complicated props that Venn attempts to instruct them in its use with little to no words. Sometimes they get the gist and the sight gag works but just as often it is held by a confused person. The sing-a-longs and performing group actions are silly fun even when he is adding his own lyrics on top and you’re singing the original ones.

Ridiculous chaos is the order of the day in a Cam Venn show. If you can cope with a sweaty hairy man getting up close and personal this is a performance that will be scarred upon your brain for some time.

Charles Horse Lays an Egg is on at the Butterfly Club until April 15
https://www.comedyfestival.com.au/2018/shows/charles-horse