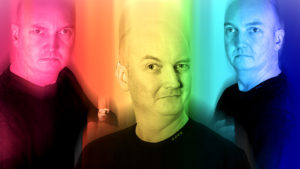 Adam McKenzie has been one third of the phenomenal sketch team Watson for many years now and it’s been too long since he has done a solo festival show. Because it’s an Adam McKenzie show, you know it’s going to be somewhat nerdy and Laser Light has a lot of Star Trek references. If you don’t have any knowledge of Star Trek, that’s OK because most people have some connection with its main theme of lasers….sorry….cancer.

I first saw Adam do standup about his bowel cancer, not long after it all happened, at Local Laughs StKilda. He was so raw, because the experience was so raw and close. The room was electric and Adam had everyone laughing and crying. I’m not surprised he’s stepped back a little from doing that sort of Festival Show. It would be pretty harrowing seven nights a week during a festival. Unsurprisingly, Adam has decided to go down a slightly more theatrical path with a parallel Trekker plot of being attacked by The Borg. They make a brilliant metaphor. These cyborgs were the Star Trek enemies who terrified the willies out of me when I 1st saw them on late night TV. Next Gen was usually heartwarming pre sleep entertainment, but not that night.

In the standup segments, Adam cheerfully takes us through many of his cancer experiences with few punches pulled. Everyone has a different cancer journey, he doesn’t pretend to have the ultimate experience. There are funny stories that come out of it all and scary ones as well.  Perhaps scariest for Adam is that he discovered that he HAD to change his inadequate diet. So, perhaps as an aid to his new lifestyle, or for the entertainment of us all, he has committed to trying out a new food that he has never tasted before, every night on stage, during the show. He has a choice of three things and the audience has to pick one for him, tonight was cherry tomatoes, kiwi fruit and unpeeled cucumber. All I could think from the sour look on his face as he ate the tomatoes, is that if you are going to try tomatoes for the 1st time, please, get them from a friend’s garden when they are warm from the sun and divinely sweet. And someone peel the cucumber, at least. It helps if you discover food at its best. Being a comedian, though, Adam is no doubt, going for the laughs over his tastebuds.

Adam doesn’t want this to be his ‘Cancer Show’, but let’s face it, it is, and why not? Most people are touched by cancer at some point in their life and because it’s always been such a taboo subject, it can feel pretty isolating. At the time, and afterwards, you tend to be drawn to those things that help you deal with what is a pretty harrowing experience. A cheery, daggy, nerdy comedy show from an experienced talented comedian might be just the trick.

Also there are lasers.

Adam McKenzie is performing Laser Light at The Coopers Malthouse