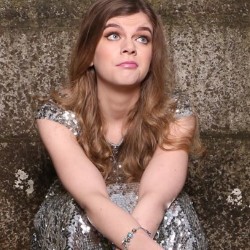 I saw Lauren’s debut Edinburgh show last year and, while it was good, I have to say she has improved immensely since then. (Shall I be parochial and suggest that it may be her trip to Australia that helped?)

Lauren is a relaxed and entertaining storytelling comic, who tells tales based on her life as a Newcastle working class girl living and trying to survive in London. She sauntered onto the stage wearing a black T-shirt, silver sequin hot pants (quite distracting with all those spotlights on her – very much a disco ball effect) and socks, to recount how she has had a bloody good year this year. She describes the three brilliant things that have happened to her (five months doing comedy in Australia, a new boyfriend and a new special skill), but points out bemusedly that there is little comedy in happiness.

So we are presented with an hour of the worst aspects of each of these brilliant things, which include horrors encountered at some zoos, her family’s surprising reaction to something her boyfriend did, her family and their interesting dietary habits, scary stories about a AirB&B in Perth, dating/not dating, best friends and posh friends and a return gig in Newcastle, where she encounters an old adversary.

Lauren’s storytelling skills are so strong, I look forward to seeing Lauren filling a much larger room next year (she is selling out). A maturing comedian with a great future ahead of her.

Lauren Pattison performs Peachy at the Pleasance Courtyard til August 26