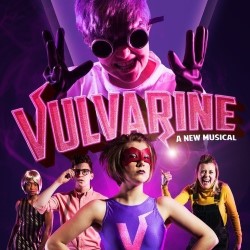 I was intrigued by the posters for this show and I’m glad I succumbed to my curiosity as to how they could make a musical about a superhero called Vulvarine. Funny and a lot of fun, with a bright and vivacious cast.

The show starts in the town of High Wycombe, a very posh but boring town just north of London, where we meet Bryony (Allie Munro) and her friends who work in the local tax office. Bryony is a single girl with an apparently hopeless crush on the office IT expert Orson, who is accidently given a file which appears to show the Tampon Tax is being siphoned to a secret account. At the same time an evil professor is using that very money to create an independence sapping potion to subdue all womankind. Bryony receives a dose of the potion but thanks to a fortuitous lightning strike (as happens in these sorts of Superhero Origin stories) is transformed into Vulvarine, defender of all women. The evil scientist, realising he has created a formidable enemy, changes his name to the Mansplainer and comes up with a cunning plan to rob Bryony of her powers.

Along the way we are treated to a number of peppy songs, a talking cat ( Robyn Grant), a little cross dressing, a lot of very hammy acting, a multitude of laughs and a thrilling story.  The venue is a large lecture theatre with a table in front of the seats, it takes away somewhat from the sexy alt cabaret vibe, but at least there’s somewhere to rest a drink during the show.

The audience at my showing seemed to be having a great time and were really getting into the action. I enjoyed this one too. Silly, nerdy, feminist fun with a message of empowerment.

Just be warned that the show run’s over by five to ten minutes.

Vulvarine is on at Assembly George Square Studios until August 26
https://tickets.edfringe.com/whats-on/vulvarine-a-new-musical