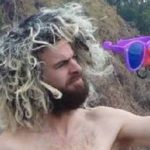 I’m not normally a fan of line-up shows. I feel like stand-up takes time to progress and the brief sets don’t give enough time for an arc to develop. Sir Cedric and Friends is a line-up show with a difference – principally because each act in the line-up is excellently performed by Christy Pearce with some rapid costume changes and a slick, precise script. If you are keen to support new comedy performers, get going because this show has five of them.

The show, as indicated by the subtitle, is about getting started in stand-up comedy – each of the characters presented is performing their first ever set and is introduced by the wonderfully dry and deeply un-enthused MC, “MC emcee”. The arc is pinned to the journey into performance of the titular Sir Cedric, falling in love with performing on his debut, questioning himself in a difficult second act and ultimately ending his career in the grand finale. Sir Cedric’s material is exceptionally well written, but the biggest laughs of the evening were delivered by the supporting characters including “Dave the Racist”, a characateur of a typical British lad and “Unfunny Pete” who delivered a stream of ironically quite funny dad jokes.

Sir Cedric is a performance that thrives on the energy of the audience, it requires a bit of buy-in from attendees to go along for the ride and those who go along will be rewarded. Those who are not willing to jump in to a quirky fringe comedy show might find themselves sharing awkward glances with their neighbour, those willing to jump right in and support the absurd will have a blast. This is also a show that will improve throughout the run, as the performer gets more intimately comfortable with each character and the material and allows himself to go beyond the script and play with the audience more. I’d love to see this show with a moderately intoxicated weekend crowd as I think the atmosphere would play into the hands of Sir Cedric and his crew of stand-up debutantes.