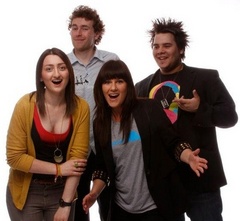 A group show featuring some newish faces on the scene is the perfect event to take a chance on, in that you are sure to make an interesting discovery. Almost Almost Almost Famous is one such production that provides a solid hour of laughs from a quartet of stand up comedians who, given the cheeky title, have lofty ambitions.

Courtney Parker opened up the show with a self confessed set of on-stage therapy. A large portion of her set revolved around her Bogan father which included an indecipherable recording of him that went on a touch too long. An extended story about some pathology procedures had the audience in fits as our hero went from one embarrassment to the next. Her use of small props to make plenty of witty comments was well done and her closing segment complete with adorable visual aides and cutesy singing made the crowd fall in love with this slightly daggy girl.

Up next was Murphy McLachlan who is very much an old school joke teller; short shaggy dog tales with zinger punchlines. This joke telling with tenuous linking is somewhat of a rarity these days and piqued my interest. An example was the inclusion of a trio of bad puns just for the hell of it got the huge groans they deserved but were fun nonetheless. A fair bit of his material was steeped in Ironic Misogyny (which was entertaining if you identified it as such) but he dared to push it too far with a line of extremely poor taste that almost made the audience turn on him. Fortunately he was able to back-peddle successfully and win us back with his cheeky persona.

Next on stage came Sonia Di Iorio with observations on being single, trashy television, rap music and . In spite of the pedestrian topics, she had a cynicism and world weariness (in spite of her youth) that provided a nice edge to her material. Sonia was supremely confident on stage and personable enough to command everyone’s attention to keep them laughing. Her decision to end on a long story that clearly had a weak pay-off was a bold move, especially when she admitted that she only has the length of this shows run to work it out.

Rounding out the show was Anthony Jeannot whose jokes traded heavily on grammatical pedantry and cynicism. Targets such as his personal trainer, his girlfriend and various fellow commuters all copped a serve with his eloquent and clever lines that were counterbalanced with silly figurative jokes. He closed with a reading of a letter to a multinational company which perfectly captured the innocence of childhood along with a jaded attitude to add extra bite.

With enough variety in the comedic styles this was a fun hour from some great up and comers (must…resist…using… the line… about…seeing them…before…they are…famous!).