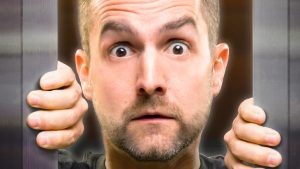 The advertising materials for this show tells us that when you hit 40, the usual Venezuelan expression is “Congratulations! You’ve made it to The Fourth Floor!”. Aristeguieta goes to great lengths to remind us that he has not, as yet, made it to the fourth floor – but’s it’s approaching quickly.

Much of the material in the show is, unsurprisingly, about ageing. His material moves effortlessly from conversations with his younger self, to the anomalies of the Xennial generation (it’s a thing – look it up!), to things of youth that you no longer want to/choose to/can do, to the agelessness of fart gags. And all delivered in a delightfully positive, optimistic and incurably enthusiastic way. There’s nothing angst ridden or cynical in Aristeguieta’s material or demeanour, which makes this such a standout from a lot of the other shows in the festival.

Aristeguieta has lived in Australia since 2012, and has made quite a name for himself at the various comedy festivals and touring comedy roadshows. This familiarity with Australia has given him a fantastic insider-outsider’s perspective on our foibles, accent and idioms.

You can tell that he loves language and languages – the different sounds, the different inflections, the different phraseology – and given that words and language are his main tools of trade, he uses them to his best advantage. He revels in the nuance. For those who love the idiosyncrasies of language, Aristeguieta’s observations and conclusions are masterful.

This for me is definitely an “add this show to your list of shows” show. This is a comic in fine form, with well-matured material. You’ll come away glad you did.

Ivan Aristeguieta, The Fourth Floor is playing 28 Mar – 21 Apr in the Athenaeum Theatre 2