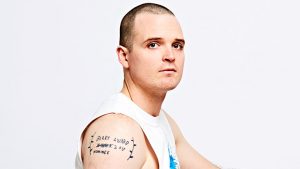 If it’s possible for a performer to “return to their roots” after only 4 years at MICF then that is what Tom Walker has done. The slightly intimidating, aggressive prop based hilarity of the last couple of years has been toned down and this show is a more sedate, calm and accessible show closer in spirit to his excellent debut clown show Beep Boop 3 years ago. That isn’t to say that Tom Walker’s current show is one to take your grandmother to, but if you did she wouldn’t be quite as terrified as if she’d watched 2017’s Barry nominated Bee Boo.

This is ostensibly a mime show, loosely structured aside from one routine that develops over the course of three or four scenes spread throughout the show. Tom describes mime as the dirtiest 4 letter word in comedy, and if there are still people put off by mime then please don’t be, Tom is a master of physical comedy and he does breaks the silence in between sketches to engage with the audience in a deeply playful and endearing way. Indeed at least one of the sketches is fully vocalised, so those terrified of sitting quietly for an hour needn’t panic, for a mime show this is very loud.

For those scared of the front row, there is a little audience participation, but it isn’t the terrifying engagement of prior years and it exceptionally friendly and fun. It is always amazing to see someone from the audience try and mime along with a pro.

The show is incredibly accomplished and well delivered, it delivers the right balance of laughs, gross-out and heart warming moments while avoiding the genuinely uncomfortable. If you’ve seen Tom Walker’s shows in the last two years expect a calmer, more polished performance this time round. If you’ve never seen Tom perform then do yourself a favour and go and check it out.

Tom Walker – Very Very is on at ACMI until April 21st