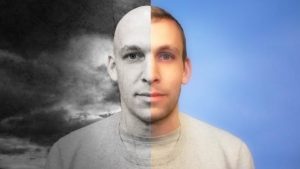 Michael Shafar was diagnosed with testicular cancer 2 years ago and of course as a comedian some of the terror was probably leavened by ‘I’ll get some great material from this!” and so he has, but the main thing that will live with you after seeing 50/50 is that Michael Shafar is a fabulous comedian.

This is not a heavy, heart wrenching comedy festival show at all, in fact it doesn’t feel like a very cancer heavy show. Michael deftly weaves the story of his cancer experience lightly through his show and only occasionally drops a bit of terrifying information and quickly moves on to more jokes almost before you’ve had time to register it. How many tumours?! Oh…

Up the top he jokes about all the little annoying things you have to put up with while going through cancer, like strangers asking personal questions and wanting to hug you. I also learned about the drug Ketamine which proved useful seeing the next comedian of my evening Rhys Nicholson.

Michael comes across as pretty cheerful for someone who’s been through hell and back. Even when he’s angry at things, like antivaxxers and smokers, he remains pretty chipper. He also talks about giving up his law degree to do comedy and other non cancer related things and the laughs keep rolling. I can see the influence of Wil Anderson’s style here and if you’re a fan of Wil’s you will, no doubt, enjoy Michael’s work.

He is still in his 20s but Michael seems more mature, he has been around the comedy scene for a while and is a confident, talented comedian. If you have been through cancer, or a loved one who’s had it, this could be a great catharsis for you, but go along anyway, it’s just a very good comedy festival show.
Also..
$2 from every ticket sold will be donated to Cabrini Hospital in Malvern where Michael underwent his treatment.