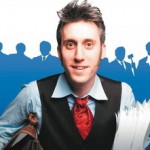 In 2009 Dave Bloustien received the Moosehead award to create a show from an intriguing idea. David had had to go to court to win wages from a dodgy promoter by proving that he was funny. It was directed by Alan Brough and a big success. I sadly missed it last time and after finally seeing it, recommend that everyone should catch up with it this time around, during it’s short run.

Dave opens with some beautiful nostalgia material to take us all the way back to 2007 when Myspace was an important Social Networking tool & nobody had heard of Kony. This smoothly takes us to the sort of political material he was performing at the time and why he was so surprised to be invited on a High School End of Year Social Cruise in Cronulla, didn’t notice blaring warning bells, his reasoning for taking the gig and the inevitable and hilarious nightmare that ensues.

It’s a wonder that there is no real anger in recounting the tales, instead, with a twinkle in his eyes, Dave enjoys sharing the ridiculousness of it all and surprises us with clever jokes along the way, my favourite being the funniest observation of the difference between nerds and hipsters I’ve ever heard. His style is intellectual, the title being inspired by philosopher Thomas Hobb’s theory and with references to Rousseau, Edgar Allen Poe and the like, it is pretty obvious that his humour might not be for drunken teens. As a tale of a nice guy underdog winning against ‘the man’ The Social Contract (redux) should actually appeal to just about anyone else.

Dave Bloustien is one of those talented performers who can combine an enthralling, beautifully crafted over arcing story with their honed crowd pleasing standup with seemingly effortless skill. He can also conjure up great characters with some well observed impressions. It is always a pleasure to spend an hour safely in the hands of this congenial comedian. Will he win his case? There is only one way to find out and if you decide to go along you will definitely be the winner.