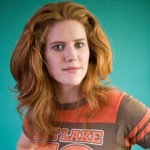 One of the first topics Sarah Kendall addresses in Persona is reviewers. She’s not huge a fan of them – their hyperbole, in particular. And admittedly, her observations are spot on. There do seem to be an inordinate number of “geniuses” working in comedy, and if you applaud a show until your hands explode you are an idiot. So I am going to tell it to you straight. Persona might not be a work of genius, but it is hilarious. It’s hilarious not because Kendall had some magical brain fart that spurted out a show, but because she has put in the hard work. She had her first solo show in 2000 and has been honing her craft ever since. It shows. Kendall appears to be completely at ease on the stage, as though stand-up is the most natural thing in the world for her.

Persona is, at its heart, a show about gender politics. Kendall talks about the kind of world her young daughter is going to have to grow up in, voicing her concerns about how she will explain our messed up culture of sexualisation to her. She tells wonderful (and horrifying) stories about motherhood and working in the entertainment industry. There really is something amiss in the world when even going to buy a piece of fruit can become a sexual issue. The material may be political, but you never feel as though you are being lectured at. Kendall has a way of perceiving the world that is novel, yet entirely common sense. Her take on the music videos of Pitbull is absolutely inspired. When Kendall warns you that things are going to get hot, you best believe her.

Persona is biting, intelligent and darkly funny. If you want to see the work of a fantastic stand-up comic at the height of her powers, this is a show for you. You even get a bedtime story at the end.