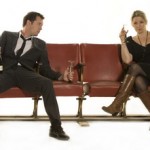 When you hear that the incredibly talented Mike McLeish and Fiona Harris are teaming up for a show, you have high expectations. Plus One not only meets those expectations, but surpasses them. The show manages to sum up decades of friendship, in a single hour, in a way that is funny, moving and thoroughly entertaining.

Plus One follows the relationships of three men and three women, all played by McLeish and Harris, who have been friends since uni. The show begins on New Year’s Eve in 1996, where the band The Nervous Wrecks is playing at a party. Band members Joe, Rick, Seamus are joined by their partners and hangers-on Nikki, Veronica and Delta as they ring in the New Year. After spending a little time with these characters and seeing how their friendships work, we then fast forward several years to find things have changed, and not all for the better.

McLeish and Harris have put together a really special show here. Plus One is hilarious, yes, but it is also poignant. They capture the nature of change in relationships with amazing precision. Over the course of the hour, you really come to care for many of the characters, even though their desires are often conflicting. There’s a lot of skill in the production, too. McLeish and Harris deftly switch between their characters without missing a beat. The characters are so well-rounded that you are never left wondering who it is on stage. Their use of music to indicate the change of era is a really neat touch. Nothing transports you back to 1996 like hearing a bit of Shaggy. And the original music is fantastic. McLeish’s closing number is an absolute showstopper – worth the price of the ticket alone.

Plus One is a brilliantly funny production with a lot of heart. If you like your comedy to be a little tear-jerking as well, you really can’t miss this one.