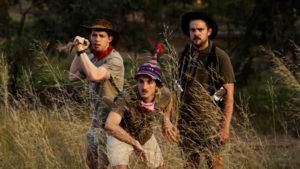 Hoping to be the next Aunty Donna, The Bushy Boys bring us a lewd and crude Pantomime. It is the tale of two Bushrangers and their encounters with a mischievous bunyip.

Just like other Pantos, audience participation is a major part of the show so be ready to shout “He’s behind you!” We are repeatedly prompted to recite a catchphrase together and even get to choose the finale of the show. The boys regularly get in peoples’ faces (I hope they were friends/family!) and if Covid wasn’t a concern they’d definitely be all over every punter.

This is a very loose performance that beats you over the head with its self-awareness. They criticise the script, production values and constantly berate the audience as well as each other. Sometimes it is difficult to determine whether they actually fluffed their lines and knocked over scenery or it’s just part of the show. Some comedic mileage is gained through this edgy approach but it gets repetative.

There’s lots of nonsensical shouting and ridiculous overacting. The patronising nature of children’s theatre is front and centre, and turned up to eleven. They manage some contrast using lines delivered with menace followed by cartoonish violence. Visual puns are given excessive build up and pointless explanation. Some lines are lifted directly from pop culture and classic texts. The thinly veiled “homages” to the greats of comedy leaves a sour taste in your mouth when you recall the perfection of the original versions.

Song and dance numbers are on par with Wiggles tunes but include much more swearing. The songs themselves aren’t particularly funny and don’t advance the plot, they instead rely on the nostalgia of children’s music and various foulmouthed asides for laughs. In these parts their talent really shines as they sure can belt out a tune and cut a rug when they’re not busy dry humping one another and shouting each other down.

It’s a fun enough show if you fancy transporting yourself to the audience of a children’s show with plenty of filth and abuse but don’t expect anything more substatial.