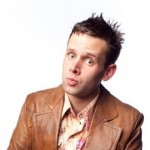 Hitting the stage with a husky voiced charm, Toby Halligan makes himself at ease with the audience from the get go in his new show “Dr Toby Halligan is not a Dr”. Halligan takes on the big guns in this show including religion and politics. But his preoccupation seems to be walking through this intolerant world as a homosexual.

Halligan is funny from start to finish. He deals in a very intelligent brand of comedy and even when he tackles some well worn subject matter, such as talkback radio, he does so in an original way. He is of course not an actual doctor (as the title suggests). The conceit for this show plays on the idea that he wants to fix the ills of this world, a conceit which operates mainly as a place on which to hang his stand up material. Of course there’s nothing wrong with that, especially when the stand up is this good.

And that is what Halligan is, a very good stand up. He touches on a variety of subjects including an encounter with a South African evangelical, the Julia Gillard/Tony Abbott quagmire, the Yumi Stynes/George Negus debacle, ADD and its associated drugs, drug addicts and their threat to society, American Republican hopeful Rick Santorum, changing the sheets as compared to survival on the ice…the list goes on. Halligan packs a lot into this hour which offers evidence to his ability to create a very tightly crafted hour of stand up.

In 2011 Halligan was nominated for the best newcomer award at the festival. This show suggests to me that it’s just a matter of time before we see his name amongst lists of future nominees. This is a highly enjoyable show which deserves to be seen in a better venue than the tiny Locker Room.