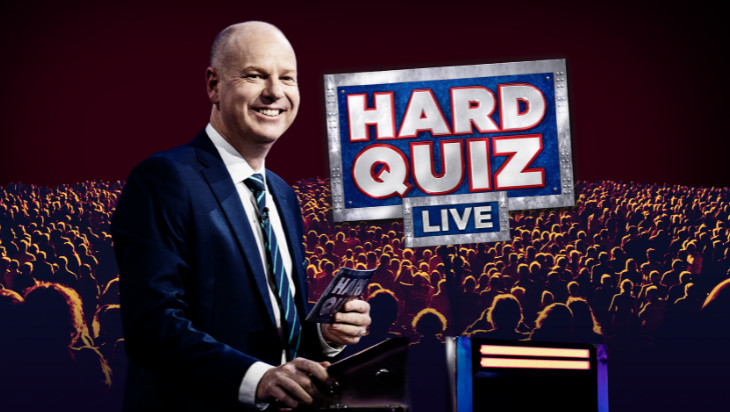 If you are a fan of Tom Gleeson, the TV show Hard Quiz or comedy quizzes generally why would you miss this?

Tom warms us up with fifteen minutes of quiz related standup talking about the quiz he was on, many years ago, that inspired him to create Hard Quiz, while also having deep digs at other quiz shows, Channel Ten, Ita Butrose and his ABC watching audience ie: us.

Once he’s won us over with his comedic insults, the lights are turned on so that audience members can put their hands up to be chosen as contestants. Tom gradually reveals the four Topics and picks out the most keen audience member to come up on stage and play. Unlike the television show where we are treated to some very obscure topics chosen by the contestants themselves, such as Bricks or The Human Eye, for the live show, the producers choose broader topics so that there’s bound to be someone in the audience with expert knowledge. Tonight’s topics were The Beatles, Princess Diana, Australian Prime Ministers and Seinfeld.

I can imagine how many audience members yell answers at the screen each week while watching Hard Quiz and dream about going on the show. The live version lets people have a go without having to apply or go on TV. We also get the experience of everyone in the audience saying the answers out loud and thus helping the contestants. Tom tells us off but it’s all part of the fun.

We are treated to what is basically a full live run of the wonderful, tightly produced half hour comedy quiz show complete with lit up podiums, a large screen for visuals and scoring, and the coveted Big Brass Mug displayed stage left.  Tom has some delightfully funny banter going back and forth between himself and the contestants, proving that  he doesn’t need a script to get great laughs. I love how delighted Tom is when his contestants ping insults back at him, like a proud Sensei.  We also got to see hilarious clips from the show and some fun behind the scenes as a bonus.

What more could you want, but a big musical finale? Tom is one of Australia’s top standup comedians and knows how to put on a crowd winning festival show. Take your quiz loving friends.

Hard Quiz Live is on at The Melbourne Town Hall until April 9. It will also be touring Australia.