This was originally reviewed by The Groggy Squirrel at the 2009 Melbourne Comedy Festival, it is being re printed because it will be performed at the Edinburgh Fringe 2012 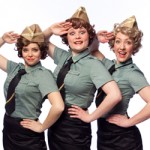 The central conceit behind World War Wonderful is that the punters take on the role of an audience of soldiers that are watching an old-fashioned ‘USO’ show, starring the three ‘Wonderful Sisters’, a trio of singers that seem reminiscent of the Andrews Sisters. Indeed, the entire all-singing, all-dancing show takes place in a strange parallel universe where World War IV is underway, America occupies Australia, and an inebriated Winston Churchill is their President. There’s something of the Fates about the three sisters, they are almost elemental in the way that they seem to have been performing in every war that has taken place over the past century. But what happens to them when peace breaks out?

This is the question the show attempts to answer, and it does so via a combination of boogie-woogie musical numbers, projected ‘information films’ and dialogue sequences that flesh out the plot. From top to bottom this is a very slick show. The songs were written by Karin Muiznieks, who was one of the writers on last year’s phenomenal Give My Regards to Broady, and every single one is as catchy as all get-out. The information films documenting the history of the Wonderfuls are wonderfully produced to look like grainy WWII-era footage. The three performers (Erin Newington and Louise McCrae, alongside author Karin) don’t just sing and dance, they are incredibly funny as well.

From the very first song there is a rich vein of satire running through these numbers that are perversely feel-good about how great war can be, and it only grows richer and darker as the show progresses. However it’s the final solo number that elevates things to another level – it is as devastating as it is brilliant, and gives a completely unexpected emotional punch to the show that left the audience gasping audibly.

This isn’t just a musical with toe-tappingly good songs (although it certainly is that), it’s a fiercely intelligent, laugh-out-loud funny hour that deserves to be playing to sell-out audiences at the Regent. This show is highly recommended – miss it at your peril.