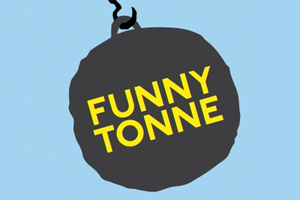 Every year the Melbourne International Comedy Festival sets a challenge as mighty as any Survivor or Amazing Race reality show. The Festival will provide a special Festival Passport that gets you into every show for free as you try to beat the record set, so far, by Kath Dolgehuy who saw 145 shows during the 2011 festival. You also have to write brief reviews of them as you go.

Each year about 40 to 60 people apply to join the Funny Tonne and Three are chosen to compete. The winner is announced during the Comedy Festival Awards, which will be on April 20th this year. So far it is mostly Victorians who have competed and there is no age limit.
If you’re interested in taking part in the Funny Tonne applications are available on the Melbourne International Website. (See link below)

The Festival describes the Benefits of being a Funny Tonner:
• Seeing as many shows as you can juggle
• The chance to ‘claim the crown’,
• A festival club pass,
• And of course, being a part of one of the BIGGEST comedy festivals in the world.

Squirrel Comedy has been lucky enough to have had Funny Tonners join us as reviewers. Erin Davidson and Caitlin Crowley have their own views on the benefits of being a Funny Tonner. The Funny Tonne obviously had a profound affect upon them both and we are thrilled that they were able to share their amazing experiences with us.

I saw 123 shows over 25 days (the final Sunday didn’t count). There were only 2 other shows that I could have physically fitted in that festival. I know this because I painstakingly worked out the roster for fitting as many in as humanly possible within the rules.

The Funny Tonne is still one of the best things I have done in my life. It was three and a half weeks of poor nutrition, minimal sleep, but a seemingly unlimited supply of free comedy that made it all worth it!

I was working full-time but managed to take two weeks off during the festival for my own health and wellbeing. Well-balanced meals and sleep have to take a back seat to your desire to see as much comedy as you can. My fellow ‘tonners’ were Liz- a girl from Sydney so was staying in a hotel, whom I’ve stayed in touch with since, and Steven – a man who was retired. Both keen comedy goers and I have to admit, I rediscovered my competitive streak. I really wanted that netball trophy!

My first big tip for reaching that goal is that I was happy to see people I’d never heard of before and didn’t bother hanging out for the ‘big’ names or shows. I planned my roster purely on times and locations.

My tips on Planning Your Funny Tonne Comedy Festival Roster:

It’s all honesty based though.
The general unwritten rule was to attend at least 75% of the show. Sometimes you had to leave early to get to another if the one you were in started or was running late.

I got fit during the festival running around the streets of Melbourne and came to rely on the Hungry Jacks stunner deals.

I’m baffled by the fact that the one question everyone asks me about it is, “Didn’t you get sick of laughing?” Umm… NO, I signed up for this! While there were only a small handful of shows in amongst the 123 that I would have rather been sticking bamboo under my fingernails than sit through, overall it still remains one of the best experiences of my life.

The fun didn’t stop at the end of the competition. The next year I was reviewing for this fine website, since I’d caught the bug and I needed to find a way to be immersed in the festival culture again.

It also inspired me to produce my own festival show, Unspeakable [a variety show with a line-up of several comedians, such as Host Adam Hills, aimed at the deaf community] the following year. After seeing 123 shows, I learnt pretty quickly what makes a show work well, and perhaps even more importantly, what makes a show not work. I made connections with comedians, producers and MICF staff simply by hanging around and starting conversations with strangers. The festival is an amazing environment for being able to do that easily: “So what have you seen tonight?”

As an Auslan student (Australian Sign Language) I saw an opportunity for members of the Deaf community to participate in the festival and worked with MICF staff to develop the Deaf Access Program, launched in 2008, the same year my inaugural show Unspeakable sold out!

Sam and I did the Funny Tonne as a team, we saw 115 shows (me 67, Sam the rest). The show I totally loved was Phil Nicol’s The Naked Racist. Unfortunately I saw it on the third day and I never quite hit that high again.
It was a total indulgence, we gorged on comedy and I learned quite a few things:

1. That it is possible to sit in a packed audience, with every single person laughing themselves sick and not feel remotely amused (Alzheimers – the musical)

2. That some people just laugh a lot – even if it’s not that funny

3. Some people will laugh at anything

Here is a review of my Funny Tonne experience, written at the time.
It is 10 pm on a Thursday night and I am watching grown men crush chocolate royals on their foreheads while making lewd jokes. If I wanted to see this I would have stayed home, opened the pantry and told the kids to go sick. Everyone around me is guffawing with glee but I sit there unmoved. This is the show I begged to see. This is the show many reviewers had on their “must see” list. This show is nominated for a Barry award? It’s good but not that good. I’m watching We are Klang, the 57th comedy show I have seen in a 23 day period and perhaps I am laughed out.

I was one of three people taking part in a Melbourne International Comedy Festival challenge, to see 100 shows in a 25 day period. Well to be honest I was half of a team. I have four kids, two jobs and a marriage to hold together so I was allowed to share this trip with someone in a similar situation. The other two parties involved, Dani and Nath, were both 23 year-olds with youth, time and energy on their sides. I picked my friend Sam, a lawyer taking time off to be a stay-at-home dad to his four kids.
Sam and I needed to divide up the program so we didn’t double up on shows. We acted like greedy kids with a tin of Quality Streets chocolates, fighting over our favourites (Damian Callinan, Greg Fleet and Anthony Morgan), snatching the hot picks (Mark Watson, Daniel Kitson, David O’Doherty) and dividing up the remainders as fairly as we can.

Caitlin: I’ll see D-Cuppetry if you see Puppetry of the Penis.
Sam: You can have Ed Byrne, I don’t like his hair.
Funny thing was, Ed Byrne was pretty good and he’d had a haircut.

One of our duties was to post a brief review of each show on the website. We took the reviewing seriously; these people had the guts to put on a show in a competitive field, the least we could do is give them our honest opinions. The first show I saw was Il Dago, I pumped out a 900 word review, reread it and realised no-one in their right mind would want to read it. I culled it to two paragraphs and we were off. Comfortable in the knowledge that no-one but family and friends would read our reviews tucked away in the back blocks of the MICF website – I let rip. Great shows got glowing praise, average shows got encouragement and bad shows got a roasting.
Over the three week period I became intimately acquainted with every MICF venue. I scurried from the Victoria Hotel to the Portland Hotel, from the Swiss Club to the CAE Scone Room. I ran from Trades Hall to Melbourne Town Hall so many times that the bouncers at Billboard waved as I passed. I became an expert at the 100 metre dash to the train station; I fought festival flu and fatigue to squeeze in up to six shows in a day.
I gorged on comedy and not just the live stuff. I religiously read reviews, downloaded podcasts, listened to comedians guest hosting radio shows and watched routines on YouTube. Other comedy junkies sought me out for tips on where to catch some decent gear. My friends and neighbours rang me for suggestions. My mate called me every day for a run-down. A comedy-loving dad who was housebound hit me up in the playground for a fix, “Seen anything good? Details? Names?” I fed their habits carefully, choosing the best and most suitable talent for their tastes.

Comedy fever was everywhere. People exiting gigs repeated the jokes as they queued for their next show. The boys collecting for the Fred Hollows Foundation on the street adopted a stand-up approach as they asked for donations. We started to notice our reviews were posted on the performers’ web pages. There were 278 shows in this year’s festival and not all of them can get reviewed by The Age. Performers started asking us to come to their shows in the hope they could pluck a phrase from our review to put in bold, red lettering on their show flyers.

This experience was not without awkward moments. I wrote a disappointed review of Dave Callan’s Flame Retardant Monkey and the next evening he sat next to me on the tram. I knew who he was of course, but he was thankfully unaware of my identity. Part of me wanted to tap him on the shoulder and ask him the meaning behind his complex show and the other part of me was too embarrassed. We rode the 15 minute trip in silence. After checking out Greg Fleet and Mick Moriarty’s Fleetwood Mick I wrote, among other things, “Mick Moriarty is not a comedian…” A couple of weeks later I read that he is the partner of Festival Director Susan Provan. Clearly this gig was not winning me many fans in head office.

I laughed harder and longer than I have in years. I enjoyed the crazy ride with Phil Nichol, I caught Josie Long’s optimism, I barracked for the always inspiring Rod Quantock, I laughed harder and cried discreetly at The Debutante Diaries, I was in awe of Ross Nobel’s twisted mind and I applauded Lawrence Leung’s breakdancing. In bed I wrote reviews in my head. How many stars will I give this show? Is there a softer way to say “avoid at all costs?”

On our final night we were invited to attend The Barry awards. The winner of The Funny Tonne was announced and surprisingly there was a dead-heat. Somehow Sam and I managed to finish equal first with our fellow competitor Nath. We hit the stage to collect our prize, some terrible joke books, that Sam and I generously allowed Nath to keep. As we left the stage Nath was heard to mutter, “Where am I supposed to put this crap?”

The votes are counted. The awards have been given. Dani, Sam, Nath and I pretend we’re glad it is over but it’s going to be hard for us to wean ourselves off this three-week long diet of enforced laughter. So maybe We Are Klang didn’t float my boat, that doesn’t mean they’re not good. The festival is officially finished but be gentle, some of us are going cold turkey

So do you think you’re up for all of that?