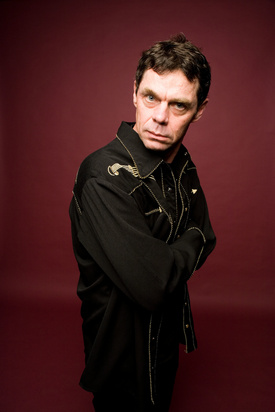 The ever grumpy, acid tongued Montanan? Montanite?(…he’s from Montana) Rich Hall is back in Melbourne and ready to tell us what’s what like only he can.

Armed with a mic, that husky yanky accent, a guitar and a bag full of beefs, Rich rips through a broad range of loosely political and slightly more irrelevant topics, snarling and yelling at stuff he doesn’t understand.

One company that does escape his wrath though is Cadbury. Seeing a man compare the taste of chocolate to skipping on rainbows so brashly is so something to behold.

Where Rich really shines is with his off the cuff, half planned tunes where he “fucks with” some unfortunate audience members up the front. You’ll find yourself scratching your head as to whether he just came up with it or not, he’s as quick witted as the best of them.

Rich’s grizzled delivery, timing and well placed passion is a finely tuned art that he makes look effortless. Mix that with his razor sharp wit and brilliant musical comedy and you can’t lose. A true master.

Rich is on at The Capitol Theatre
http://www.comedyfestival.com.au/2013/season/shows/rich-hall