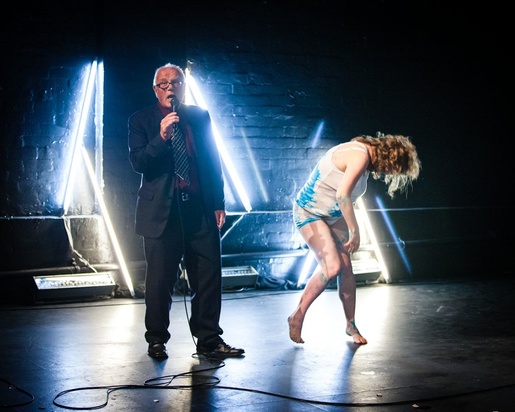 Like most practitioners in the arts, Bron Batton’s parents don’t quite get what she actually does. Through a series of filmed interviews, performances and monologues by Bron and even live stand up spots by her Dad, James, Sweet Child of Mine explores the cultural and generational divide between Mr and Mrs Batten and one of their offspring.

A lot of the humour comes from the parent’s blunt but honest responses to the questions Bron poses to them about the art world. This raises the question of whether the comedic premise of this performance is focused on the artistic naïvety of the older generation or the pretentiousness of the performing arts. It could depend on the audience watching it; an arty Fringe Festival crowd could lean towards the former while a general Comedy Festival audience could see the latter. It walks this fine line constantly but all can agree that having a loving and supportive family is the point of this show.

The dance pieces that Bron performs for us are executed seriously. Humorous costuming (she performs most of the show dressed in her underwear and dons some elaborately amusing outfits) keep it from being too much like a dour modern dance show. She does a good job of giving us a taste of the dance pieces that are referred to in the interviews but curiously, they don’t always match the conversations chronologically.

Bron does a serviceable job in making her monologues amusing. Her anecdotes about her family’s history and her artistic endeavours contain enough funny details to elicit some laughs of recognition.

A roleplaying exercise involving an audience volunteer speaking with Bron’s mother via telephone is an attempt to tug at the heartstrings. Only hearing one side of the conversation is disappointing and robs this scene of its power.

James threatens to steal the show whenever he is on stage or screen. Flirting with his demure wife of 40+ years is so charmingly cheeky. He tells adorable Dad Jokes, pokes fun at Bron’s lifestyle and bravely goes off script to his daughter’s horror. He seems to be really enjoying touring this show with his daughter.

A bold and ambitious endeavour, Sweet Child of Mine has been garnering acclaim at various Fringe Festivals but it is still geared towards dramatic performance rather than a comedic one. Nonetheless it has enough warmth to keep you smiling.