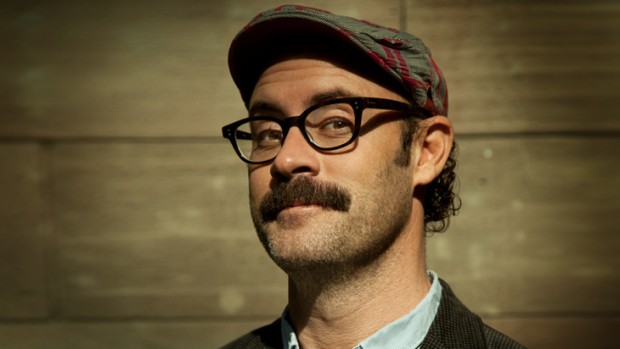 Considering that Sam Simmons created a brilliant television show for the ABC (Problems) at short notice last year it is astonishing that Sam has had the time to get together a full length comedy festival show at all. It isn’t up to last year’s glorious and romantic About The Weather but it’s Sam’s loopy equivalent of an hour of standup and that’s pretty damn entertaining.

If you’ve seen Problems you’ll have an idea of his Pub Trivia Guy character, or you might have heard his Shitty Trivia on Triple J radio. This is more fast paced and his rapid one liners are framed as questions with answers that the audience can’t possibly guess and his disappointment in the audience’s inability to guess gets more so as it goes along, escalating towards anger as his questions progress from traditional comedy, to weirder absurdity and then rather tasteless and off putting filth. He’s aware of occasionally alienating the audience but comedically blames us for not being on his wave length. My favourite shout to the audience was ‘We’re in a fuckin’ RSL, Relax!’

Sam breaks up the questions with RSL announcements, a pigeon impression, some cute and not so cute pictures and a running conversation with an amiable meat tray called Russell who becomes a side kick of sorts. The obligatory dragging up of someone on stage for cuddles & ritual humiliation was a tad unnecessary and the kid, who enjoyed it at first, was left on stage for way too long, to the point that he got a bit bored. I felt a good ten minutes could have been trimmed from this show (though I feel like that about a lot of festival shows I see), though Sam conveyed grumpily that there had been a stuff up with the otherwise impressive sound cues that may have interfered with the flow or something. It was hard to tell in the audience, because although he did have a running thread about a mysterious shoe, a lot of it is pretty surreal and silly.

The amazing thing about Sam is that his style has never changed, it’s developed and improved, but he’s still the same eccentric comedian I saw over 10 years ago, with his recorded music, supporting cards, strangely amusing cartoons, love of animals, non-sequiturs and jazzy style. The comedy connoisseurs at The Local loved him, but we couldn’t imagine at the time that he would fill huge mainstream local and overseas theatres, the way he does now. Proving that audiences enjoy taking risks more than you might assume and they know a born comedian when they see one.

Sam Simmons is at The Hifi Bar
http://www.comedyfestival.com.au/2013/season/shows/shitty-trivia-sam-simmons