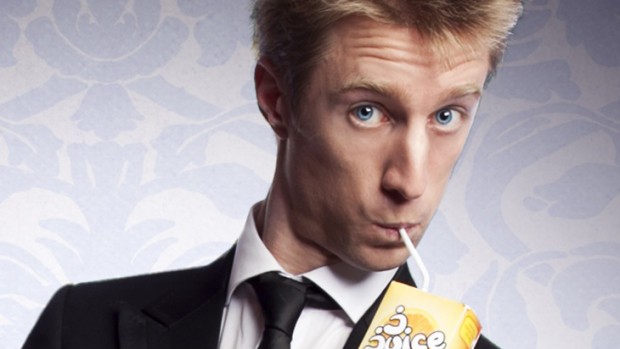 When Siamese twins are cut in two, there is an expectation that bad things will follow. And after his much publicized split with Randy (video), some may have feared the worst. In fact, some people forget that he did make a name for himself in his own right before pairing up with Heath McIvor (Randy’s vital half). However, any doubters in the audience were quickly brought around with Sammy J’s brilliantly constructed show which contained a mixture of stand-up, readings, songs and even some tap dancing.

After calmly entering the stage, he started off slowly with a female voiceover reciting his rejected children’s novel manuscript with Sammy then providing the comedic context. Things then gathered pace as he wove in a philosophical welcoming to all present before breaking into some stand-up drawing a clever parallel between comedy and political manoeuvring.

Sammy clearly uses personal experiences and interesting facts as a basis for his comedy and had the audience in stitches as he spoke about blimps, possums, g-strings, and the oddities of life as a performing comic. At stages, the audience had to be patient before reaching the punchline – but it was almost always worth it.

The show also featured a number of live renditions from his “Skinny Man, Modern World” album including the show’s namesake, “Keep it Clean (F**k Song), and “You Held My Hand”. Contrary to his fears, the hearty applause was all genuine from the crowd. After one song he cheekily moaned that the audience was “only clapping because I’ve just finished the song and you feel obliged!” He was wrong on that account because he’d nailed it.

The absolute highlight of the show was his ability to simultaneously develop a number storylines and making everyone feel satisfied at the show’s completion that all loose ends had been tied up nice and tightly. He exudes a unique charm which is skilfully used as a decoy for the wild and raw material he covers in his show. In all, Sammy J delivered the goods on this night and proved that he’s lost nothing at all as a solo comedy act.

Sammy J is performing at The Arts Centre
http://www.comedyfestival.com.au/2013/season/shows/potentially-sammy-j