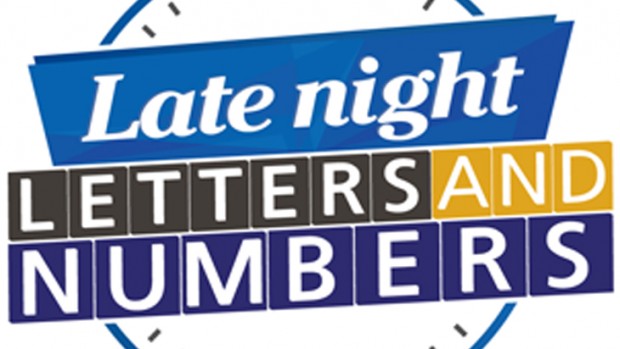 This is a fun nerdy little comedy quiz show that is based upon the stupidly axed Letters and Numbers which was based on the UK show Countdown, but not called Countdown for very obvious reasons. Before that there was a French show called  Des Chiffres et Des Lettres, but you didn’t need to know that. The best way to see it on TV is being sent up in a stunning episode of The IT Crowd. called The Final Countdown.

The basic idea is; two contestants compete in various rounds, in this case they are guest comedians. The Letters round is like boggle where the contestants try to make the longest words out of 9 random letters. In the numbers round a random target number under 1000 is given by an audience member, then 6 random numbers are drawn and the contestants must use these to somehow reach the target number using mathematics. The final round is the Conundrum which is an anagram that the contestants must be the first to unscramble. Where it differentiates itself from the TV shows is that it is live, it is comedy and it is late at night.

The late night comedy atmosphere means that although they take the game seriously to a point, there is a lot of silliness, veering off topic and naughty language. They are also fairly encouraging of audience participation and will award points to impressive audience members. You could hear a lot of audience members around you guessing at words or getting the maths perfect, but not everyone was brave enough to pipe up when invited to do so. It can be pretty hard not to participate in this infectious show.

The night we were there guest comedians Karin Danger – nee Muiznieks (Hot Box) and Yianni (Numb & Number) made admirable adversaries while up the other end of the desk the Watson (Once Were Planets) duo played comedy relief with Adam McKenzie and Tegan Higginbotham as moderators in charge of the giant dictionary. Ben McKenzie (Splendid Chaps) makes a fair go at being Lily Serna, letter displayer/ maths genius but for reasons I can’t put my finger on, cannot quite capture her demure allure. The host, in great contrast to the cheerful and rather straightlaced Richard Morecroft, is the famously cynical & comically grumpy Nick Caddaye who does a great job of keeping it all rolling and not running too late.

Late Night Letters and Numbers is only on Friday nights of the Festival at Trades Hall in the Old Council Chambers
http://www.comedyfestival.com.au/2013/season/shows/late-night-letters-and-numbers