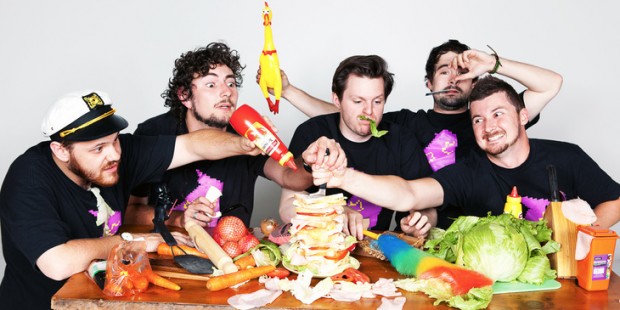 The Wizard Sandwiches (Jerryd Clifford, Stuart Daulman, Andrew Belsten, Dylan Cole and Jake Ludwyke) are a local sketch comedy group and while they might be relatively new to the festival scene, the boys have put together a really accomplished and confident show. It is sketch comedy in its purest form – aside from a couple of running jokes dotted throughout proceedings, there is no overarching narrative, no message tying it all together. It is simply silliness presented in many different forms, and The Wizard Sandwiches do silliness very well.

The show is fast-paced and consistently funny. All five performers are equally strong, but it’s a diverse group of talent. Each of the Wizard Sandwiches crew brings a different energy, from the manic Charlie Day-esque Daulman to the mischievous gruffness of Ludowyke. As a team, their dynamic is fantastic. There is some great character acting in there as well. Between the five of them, with the assistance of a few props, they bring a much larger cast to life.

The sketches are twisted and delightfully absurd. The Wizard Sandwiches take you to the world of children’s netball, the Wild West and a whole lot in between. A running gag about ‘crab-thermometers’, with seemingly improvised lines involving characters telling of increasingly bizarre places where they’ve seen one before, was wonderful. Music is used to great effect, particularly in their show-stopper of an opening sketch and in some very funny callbacks to a WorkSafe ad.

The Wizard Sandwiches is inventive, playful and a whole lot of fun. This is one of the best examples of sketch comedy I’ve seen at this festival. Get in and see them now, because they’re sure to get bigger in the near future.

The Wizard Sandwiches is showing at the Old Council Chambers at Trades Hall until April 21.
http://www.comedyfestival.com.au/2013/season/shows/the-wizard-sandwiches