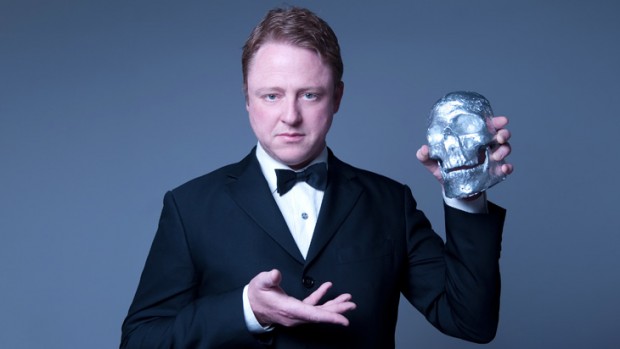 The synopsis of this play (the leader of our robot overlords in a dystopian future forces the last human, using the threat of extermination, to help him understand the formula of art) indicates that this will not be a light and fluffy night of comedic theatre. Robots vs Art is a theatrical piece that straddles the fence of drama and comedy. At times it is difficult to determine whether you are watching a serious drama that includes comic relief from the bleak dystopia or a very very very dark satire. As it has been included in the Comedy Festival program I am going to view it as the latter.

The satirical elements aimed at the theatre and high art are wickedly subversive. They have plenty of fun exploring the dynamics between creator, cast, director, audience and critics. Many witty lines make fun of each tier of the theatrical system. Characters quote various well known texts out of their original context to provoke chuckles of recognition. Theatre theorists and students will have a whale of a time at this performance.

The majority of the humour comes from the robots interacting with the last human Giles (Daniel Frederiksen). There’s plenty of wordplay with the misunderstandings that occur when his English colloquialisms are taken literally. We also see some comical exchanges when pure logic is pitted against Giles’ frustrations that the robots are unable to see themselves as fallible. The use of the bot’s Lie Detection software sees some amusing back peddling by Giles when his sarcasm is met with blank stares (and threats of violence).

As comic characters, the robots are more successful when they retain their mechanic characteristics so that the physical humour can complement the words. Clawbot (a scene stealing performance by Paul David Goddard) and Fembot (Natasha Jacobs) have an amusing awkwardness to their actions while the Executive Master Bot (Simon Maiden) becomes humanistic (a sadistic streak looms large) so he has to rely primarily on the amusing verbal sparring with Giles to get laughs.

Technically this is a brilliant production. A menacing electronic soundtrack creates the perfect mood as does the lighting design. Streamlined modular units transform the stage along with amazing, detailed props. The cast do a wonderful job inhabiting these characters.

Robots Vs Art is an awesome piece of theatre that is powerful and thought provoking. If you can cope with the extremely dark tone (including graphic descriptions of misery and off stage violence) and serious musings on the human condition you will be rewarded with some amusing ideas from a unique point of view.

The season for Robots Vs. Art extends beyond the Comedy Festival. It is on at La Mama Courthouse until May 5th.

For bookings after the festival:
http://www.trybooking.com/Booking/BookingEventSummary.aspx?eid=39154