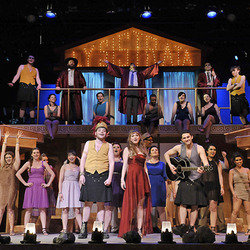 OK, we all know the story of Lysistrata, don’t we? Come on. The famous Greek comedy by Aristophanes? No? Oh, the education system today, when I was young etc etc.

Here is a quick precis of the tale. Lysistrata is a noblewoman of Athens at a time when the Athenians and Spartans had been fighting a war for a decade. She is fed up with the menfolk all going off to fight and only coming home on leave for conjugal visits so she comes up with a novel plan to stop the war. Banding all the wives of the soldiers to an oath that they would not, ummm, ease their husbands tension, and sending a messenger to the Spartan women to do the same, as well as having the older ladies barricade themselves in the Acropolis (where the treasury is), she sets down to wait. After a long period of time, in which the wives are suffering as much as their husbands, a peace treaty is agreed to and everyone gets down to releasing their tension.

This is a rollicking version of that play, by an American University which impressively sticks quite closely to the story, with some songs and dances, a bit of puppetry, a LOT of crude genital based humour (which is nowhere near as rude as the song that was playing before the show, but that was probably what the kids are listening to these days). While the young ladies holding out against their soldier husbands was the main part of the story, I found the funniest sections were those that pitted the old ladies against the old men. Lots of accents (mostly US regions but the cops sounded like camp Germans for some reason). The songs and dances were performed well, but the sound was a bit too loud, as I think they had calibrated it for a full room – and for an 11.30am show, that was a little optimistic.

What this show needs is an excited enthusiastic crowd feeding back some of the energy from the stage. I’ll try and tempt you to come to one of the few remaining performances of this show (it finishes on Sunday). Would you be interested in seeing a show about the battle of the sexes which has a number of young women in short Greek skirts teasing their soldier husbands who are also wearing short skirts (kilts) and singlets. Do you enjoy loud and boisterous songs and dances? Very funny and sex based humour? How about a bit of culture, as you learn a very amusing famous little ancient Greek comedy? There are dick jokes and it’s a comfy, dry place to eat your Brunch. There’s no excuse for missing this (well, maybe I’ll accept a hangover).

It’s on at The Gilded Balloon Teviot at 11.30am with a short run ending on August 11