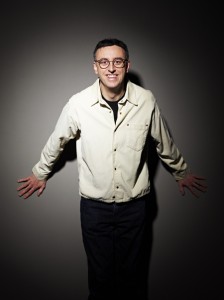 It’s a simple concept, a comedic author performs a chapter of his first autobiographical book on stage in a small room. Except this is Comedy legend Tony Martin of The Late Show and Get This. Shows worshiped by their cult fans who still maintain tribute websites such as ChampagneComedy.com, a Get This Tumbr and Capril. He’s also the author of some beautifully written, evocative and laugh out loud funny books of autobiographical stories. Tony doesn’t perform often and when he does his fans, including many in the comedy industry, flock because they know he’s going to serve up a diligently crafted, solid show chockers full of laughs, and he did.

The last time Tony Martin performed in Melbourne was only a month ago at the pop-up boutique of comedy nights in Melbourne called The Shelf. He treated us to a hilarious slide night, making funny commentary about photos he took while following Ross Noble around the UK filming his new, upcoming TV show Freewheeling. Tony worked as a writer for the show and it’s a testament to his talent that Ross flew him over. The Yeti was quite a different performance. While his night at The Shelf was fairly relaxed and slightly improvised, allowing for silly comments by The Shelf team, who were also on stage, this was very formal with no banter, no explanation and no introduction.

The cold opening is very dramatic and works beautifully for this monologue, which not unlike Tony himself is trim, sleek and well groomed. It forces the audience to focus from the start and the laughs are quick and constant. He has memorised the entire chapter word for word and gives us the text from the book and nothing more. Apart from something special at the end, the big bonus for a live audience is Tony bringing all the characters to life on stage and of course his rendition of the ridiculous silly voice of his eccentric Swiss/German/New Zealand landlord Gunter. A character that made the chapter so memorable in Lollyscramble because you have to read large chunks of it out loud to work out what the hell he is saying. He’s written Gunter’s speech out phonetically on the page and this show is worth coming to just to hear Tony doing Gunter’s mindboggling thick accented outbursts.

It is the 50th anniversary of Dr Who in 2013 and this would have to be one of the subtlest tributes. The title of Tony’s show is referring to a very obscure Dr. Who monster from the black & white Patrick Troughton era in the 1960s where most episodes have been destroyed. I’ve only recently seen a friend’s recorded copy of ‘Web of Fear’ with Yeti’s for the first time and they are big, lumbering fluffy and cute looking robots, but I’m sure terrifying to a young child. Tony reveals their significance during his show which is actually made up of an accumulation of smaller tales about a shared house he lived in, in Auckland and the fascinating people who lived there.

It’s a joy to watch a performer who has complete confidence in his meticulously constructed prose. He’s also an excellent comedic character actor with years of experience in sketch comedy on TV and on radio. I was in tears of laughter throughout the show and could not recommend it more highly. This is one of those ‘Not to be Missed’ comedy events in Melbourne. Shows have sold fast and extra performances have been added. See it if you can.

Tony Martin is performing at The Butterfly Club. The season is sold out but extra performances have been added.
BUTTERFLY CLUB (TUESDAY 24 SEPT) AND FRINGE HUB – MAIN THEATRE, LITHUANIAN CLUB (THURSDAY 26 + SUNDAY 29 SEPTEMBER)