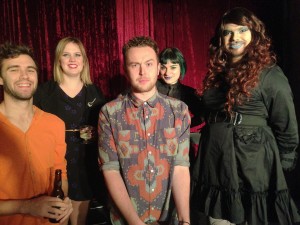 Late night interview shows pop up all over the place during festivals, Art, Sex & Snacks is very much your alternative talk show that fits perfectly into the fringe of the Fringe that is The Tuxedo Cat. It really is the kind of frank talk show that will not be finding itself on mainstream TV anytime soon.

In a room suitably draped in red crushed velvet, we enter to discover the brightly clad host and her guests are chatting informally with each other off mike on stage which gives a friendly atmosphere. Lisa-Skye is a relaxed and skilled host, keeping the pace up and the balance of giving each guest their time to shine, while occasionally shining out herself. Her guests are encouraged to open up about their art, their sexuality and their favourite snacks. I’d had no previous knowledge of any of tonight’s guests, but by the end I felt we had all shared a fairly intimate, if at times raucous experience.

Lisa-Skye brought together four artists from widely varying parts of the Fringe Festival who were all very entertaining with fascinating shows on. The night I went we had Rennie McDougall who’s dance performance Yes Dance (Deeply Superficial) works against the idea of dance as storytelling and celebrates the body. Nell Kentish of the theatre company Big One Little One is doing a Live Art piece that is performed for one audience member for one minute – Confetti, the rest is a secret for you to discover. Simon Morrison-Baldwin who was giving Lisa-Skye’s outfit a run for her money in his drag persona as Lady Diamond is doing a cabaret show called Corpse about an 18th century transgender spy who spent half his life as a man and half her life as a woman. Finally there was gay comedian Hunter Smith whose show Apprentice Heterosexual explores feigning heterosexuality.

If the aim was to familiarise audiences with artists and encourage them to see the shows of her guests that was achieved. Starting out with performers completely unknown to me, by the end I wanted to see all their shows. Except for maybe dance, which is not my cup of tea, despite Rennie’s charm and humour, that would take some extraordinary persuasion. I’m sure each evening depends on the guests involved but we had an uproarious time of laughs and confessions. Topics included food during sex, sex toys, the gay hankie code and an excellent legal drug to take while giving birth. None of this is surprising while Lisa-Skye is at the helm.

It’s a short run and I’d recommend you catch it while you can.

Lisa-Skye – Art Sex and Snacks
is on at 10.45 til Sept 24th
Tuxedo Cat
http://www.melbournefringe.com.au/fringe-festival/show/art-sex-and-snacks/

There is a Podcast of these shows available here: