In this largely autobiographical tale, Geoff Paine explores the ridiculous aspects of anger management while delving into some serious issues. The show, which 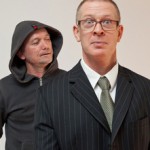 involves several clients in a court-ordered group workshop, does a wonderful job of shedding light on the topics while providing enough levity to avoid a heavy slog.

The social workers Trevor (Syd Brisbane) andLorraine(Michelle Nussey) have an interesting dynamic, starting out with awkward boundary crossings that quickly escalates.Lorrainecontinually spouts the irritating counselling jargon as a well-meaning voice of reason, almost out of her depth in this sea of testosterone. Trevor is the ham-fisted bloke providing hilariously bizarre analogies who tries to keep the discussion on track, even if that means stepping on toes.Brisbanedominates the show with brilliantly exaggerated alpha male bravado while Nussey plays her nuanced role well; bouncing off the others with appropriate restraint.

The participants are portrayed by Paine and Ross Daniels, who each take three characters. Using simple props such as hats and glasses or minor adjustments to their clothing, Paine and Daniels switch swiftly between these characters. Each are given unique mannerisms and voices to help emphasise the humorous lines.

One of Paine’s characters is essentially himself. He spends most of his dialogue butting heads with the counsellors with plenty of witty interchanges, while managing to take a swipe at his own real life background. He also brings to life a suburban bogan, Nicholas, whose bluntness is to the horror of the politically correct counsellors. His third character is Nguyen, a Vietnamese gent whose exchanges are filled with misunderstandings that lead to comical shouting matches.

Daniels’ characters are also well drawn and played brilliantly. Junky Bogdan provides plenty of comic relief to contrast the seriousness in this play. He is a wonderfully edgy ball of energy spouting plenty of wacky lines that could only come from a drug-addled brain. The downtrodden Brian makes for a contrast to the larger-than-life characters – not contributing much humour to proceedings but instead anchoring the show in reality so that it doesn’t stray into farce. The senior citizen Reginald is a character of attrition and sorrow who adds deep sombre moments while piping in with the odd amusing dithering comment.

The script is lively in both comedy and drama. It trades heavily on stereotype which brings humour and gets the points across, doing so in an even-handed manner. The overriding impression is that regardless of the characters’ backgrounds they are all in this mess together and should ‘let shit go’. It’s a fascinating and entertaining play.

Information about the 2012 Season here