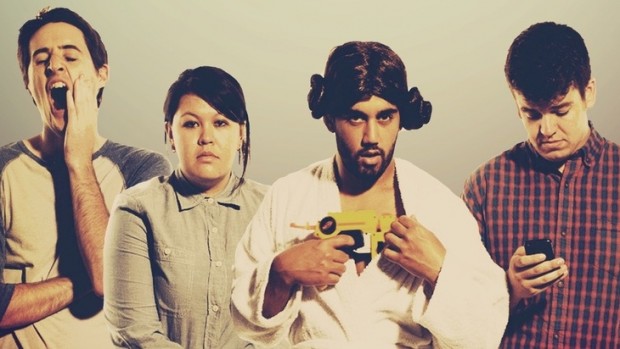 The world of fan fiction is a terrifying one, where fans of TV shows, books and films love them so dearly, they’re unwilling to let them go and decide to give writing some more a red-hot go. Characters that should never get together fall madly in love. Universes that should stay firmly apart are fused. Stories that need no further explanation are drawn out until they are a shadow of their former selves. I mean, there’s Tetris fan fiction that exists for goodness sake. FanFiction Comedy (Nick Gibb, Steven Boyce, Heidi O’Loughlin, Eli Matthewson and Joseph Moore) steps into this often questionable world and brings the funny.

Each night, a different line-up of comedians, as well as the FanFiction crew, reads a work that they have written themselves set in a fandom of their choosing. On the evening I attended, we had readings from three of the FanFiction team and special guest Tom Ballard, with Nick Gibb hosting and running commentary from Steven Boyce.

The fandoms on display were diverse. Moore told a tale of Iron Man hooking up with his robotic butler JARVIS a la ‘Her’. O’Loughin teamed up the two greatest detectives known to man – Sherlock Holmes and Steve from Blues Clues. Matthewson showed just how messed up his imagination is with a Thomas the Tank Engine story that combined elements of The Island, Alien: Resurrection and a very Welsh-sounding Ringo Starr impersonation. Ballard’s work, a pitch for a Charmed film, clearly came from a place of true fandom. Before his script, we were treated to a thorough explanation of the Charmed universe and a heartfelt rendition of ‘How Soon Is Now’.

As hilarious as the stories are, the discussions between the readings are what really make this show. No matter how bizarre the fics get, their internal logic must be questioned. What exactly are the ramifications of JARVIS being able to control Iron Man’s suit? Is it the actual salt in Mr Salt that represents his being, or the salt shaker? Boyce’s sage wisdom from the sidelines was an absolute highlight – from his musings on philosophy (“Of course you can put your foot in the same river twice. One.Two.”) to regaling us about his daily ‘Sherlocking’ to find the bread in the cupboard.

These guys have a fantastic rapport and you get the feeling they’re having a great time up on stage. With a different show every night, you’re going to want to catch FanFiction Comedy as many times as you can.

FanFiction Comedy is on at Melb Town Hall – Cloak Room until April 20
http://www.comedyfestival.com.au/2014/season/shows/fanfiction-comedy