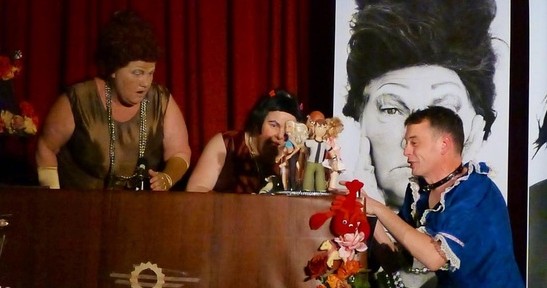 1. Miss Itchy have won a Barry Award, A Piece of Wood Award and Heaviest Aggregate Show of the Festival.

2. There’s this bit in it where stuff shoots out of one of the cast members*.

3. If you have a sudden urge to get married or buried during the show, one of the cast members is an ordained Doctor Reverend**.

5. It’s the only show in the entire festival with a free monkey****.

* The delectable Scott Brennan, who plays Prince Sex-Wee
** The Very Reverend Dr. Tim Harris officiates the show.
*** Yes, even the ladies will be turgid.
**** Free Monkey can only be redeemed at the show, with a ticket.