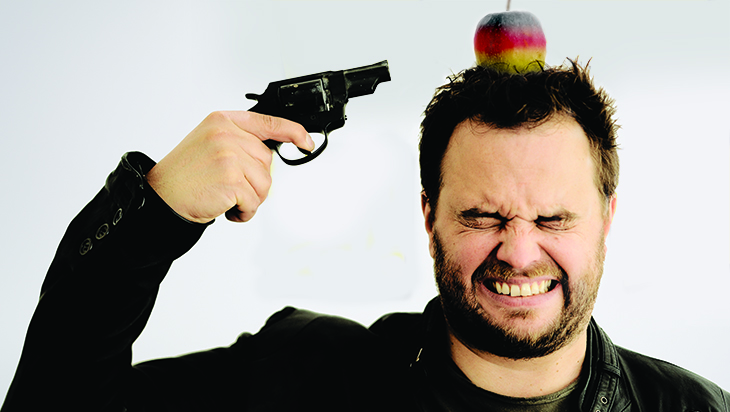 1     As a silly foreigner, I get to make jokes about Aussie society you yourself would never get away with, from the nanny state to the “Fahkin’ Straya” brigade… I’m foreign, I just don’t know any better!! Plus I’m German, so I don’t beat around the bush –“Vhat do you mean, offensive? It’s ze truth!!” So grab a beer and let me put some sacred cows on the barbie…

2     The Adelaide Advertiser says I’m “hilarious, educated, political, smutty and genius… he f***ing rocks at comedy!” I know, I know, I’m disgusted myself. But hey, if even South Australians manage to get excited about something… 🙂

3     Last chance to see!! Berlin wants me, baby! A big promoter in Berlin made me an offer I couldn’t refuse, and from July on it’s mainly comedy in German for me (yes, I know, oxymoron, whatever, shut up!!). So: This could be the last time you get to see me in English for quite a while. Let’s go out with a bang together!!

4     Let’s trade: you bring your friends to my show and I make my German and British fans vote for Australia at the Eurovision. Go on! Just picture our little European faces when Australia win and we have to watch next year’s Eurovision live from Melbourne at 4 in the morning… priceless!!

5   Because you love some mischief in your comedy, you want provocation within the hilarity, you like being stimulated while you laugh, you love thinking (and living) outside the box. If that’s you, then Reason #5 to see my show is simple: you will laugh your heart out and you’ll love my show.

Paco Erhard performs Worst. German. Ever at The Downstairs Lounge @ The Grand Mercure