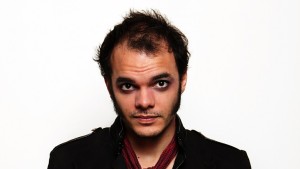 Michael Workman doesn’t do ‘traditional’ stand-up. His shows have an interesting part-narrative, part-stand-up structure broken into sections through stage lighting cues. Previous shows have tackled subjects such as Cuban dissidents and oddball characters in small town Australia, both containing a potent mixture of comedic hilarity and poignant storytelling. ‘We have Fun, Don’t We?’ follows this pattern beautifully.

This is another personal tale from Workman regarding the break-up of a relationship with a woman he truly loved and the drunken chaos which briefly followed and it is a testament to the man’s skills as a storyteller and comedian that I was not reaching for the razor after five minutes.

Comedic storytelling is a tricky genre to master – balancing the nuances of narrative with the necessary punch of stand-up, and Michael Workman has been navigating that narrow line successfully for the best part of a decade. His deadpan delivery, soft tones and expressive face allow him to deliver stinging punchlines and thoughtful musings on life and death with equally forceful impact.

His evocative and detailed descriptions transport the audience to the very places and events about which he is speaking and one finds oneself laughing at the tiny incidental details in addition to the big punchlines. One of my favourite lines involved the scathing description of a well-meaning child’s gift as a ‘macaroni fiasco’ – a phrase which I am sure I shall be trying to use indiscriminately whenever I can.

This show is full of beautiful little moments such as the running metaphor of life as a snowglobe and all of the interesting parts occurring when it gets shaken-up rather than the safety and dullness of stability and settling.

Workman isn’t afraid to take his audience to the darker places in his comedy and stories and alternates between the absurd humour of deciding that his parents wanted him to literally name the time at which he would lurch home at an ungodly hour as a drunken teenager, contrasted with the desperation of a broken man at the end of a relationship trying to find comfort and solace in all of the wrong places.

The issue of body image is one not usually covered by male comedians, but here Workman wrings it for as much comedy and pathos as he can and juxtaposes it with talk of shameful trips to a certain deep-fried poultry establishment to drown his sadness in grease.

Clearly Michael Workman is not your average comedian and this is a good thing. Yes – the job of a comedian is to make one laugh, and Workman manages that with tremendous ease; but good comedy should also make one think and this is Workman’s real talent. He has the ability to take quite downbeat subject matter – the kind of things we would rather not talk about such as death, loss, heartbreak – and fashions them into beautiful creations which force the audience to approach the subjects in a fresh, comedic light.

Yet again, Michael Workman has produced a show which is well-crafted, thought-provoking and laugh-out-loud funny.

We Have Fun Don’t We? is playing at the Victoria Hotel, Little Collins Street until April 19th.
http://www.comedyfestival.com.au/2015/season/shows/we-have-fun-don-t-we-michael-workman