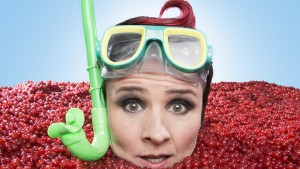 While I always encourage punters to go see new and unknown performers, it’s always a joy to relax and put your money on a sure thing. You can’t really go wrong with Cal Wilson.

Last year Cal did a theatrical character based show that was one of my favourites of 2014, this year she’s doing straight standup. When I say straight some of it is slightly twisted and occasionally raunchy but Cal is so damned perky & cute she can just about get away with anything.

Cal tackles all of the topics you should avoid in polite conversation, politics, religion, death and sex. She also asks the audience to participate. She starts off asking the audience for creative Australian colloquial sayings and goes on to invite the audience to tell her new positive ways of saying vagina. She is not judgmental and welcomes each contribution with grace and good will.

I’ve been enjoying her character the sexually repressed Adele at The Shelf but it’s lovely to see Cal breaking out as her energetic bunny self, just putting on a damn fine standup show. Cal does observational and short form story standup. She’s smart, cheerful and brilliant at making her life into accessible and timeless humorous routines.

There’s a whole generation of experienced comedians having kids and starting to write material about their new families, Cal is no different, but if kids turn you off the tales are genuinely hilarious and not the main topic of her show. Unlike a lot of married comedians who complain about their spouses Cal encourages us to sympathise with her other half who has to put up with her own childish behaviour. He seems to have 2 kids to put up with.

Luckily for us Cal Wilson’s cheeky side is perfect comedy fodder for her show Undercurrents. The title never really makes much of an appearance, it was obviously one of those names that went on the Festival application before the show was conceived, but hey who needs a theme when you’re putting on entrancing entertainment and are completely adorable.

Undercurrents is on at The Swiss Club until April 19
http://www.comedyfestival.com.au/2015/season/shows/undercurrents-cal-wilson