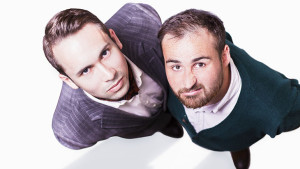 This quick witted duo Max Olesker and Ivan Gonzalez are simply put, masters of Sketch narrative. They take you through the lives of some of the more peculiar members of the small British town of Sudley-on-Sea. We arrive in Sudley on its darkest day yet, its nuclear power plant is about to cause permanent destruction to the town and whoever remains in it. Who will be left behind and who will survive?

Max and Ivan’s ability to shape shift between several different characters is something quite remarkable. The End is such a fast paced show, that between laughs you are left in awe sitting and wondering, how on earth are they doing this? Such detailed intertwining stories, one slip up and things could so easily unravel. But they don’t! Ivan’s failed attempt at whistling is as much ‘error’ that occurs.

Fast becoming audience favourites at the festival over the past few years, it is not hard to see why people keep coming back for more. They are not only talented comedians, but extraordinary story tellers. They have a great ability to create an unbelievably believable world, where no one questions or blinks when they jump seamlessly from one character to another. These two brits are wild, crazy and uninhibited but also bring relatability and likability to some unusual and generally unlikable characters. Unpredictable, as the story reaches its crescendo, the anticipation to see what is going to happen to all these characters intensifies. If you take a moment to check you will realise you are literally on the edge of your seat.

Even with such a careful and well-crafted script Max and Ivan like to allow room for them to be challenged, by bringing an unsuspecting audience member into the mix each night. This allows them a little more room to play, but also adding space for some fresh laughs and excitement for them as well each night.
You leave with not much else to say other than..wow! You may just need to go grab a post-show drink and de brief.

Max and Ivan – The End is on at  Victoria Hotel

For information and bookings go to the MICF website: